Growing up, I was such a huge cereal fan. Cereal in the morning, cereal in the afternoon and the evening. A sugary snack that filled me right up before a long day at school or to satisfy my post-school munchies. Drowning it in ice-cold milk, crunching away in front of the television before heading off to do some hard work (well, what I thought was hard work back then!)
As another of my birthday treats, I got to tick off the Cereal Killer Cafe off my London bucket list. 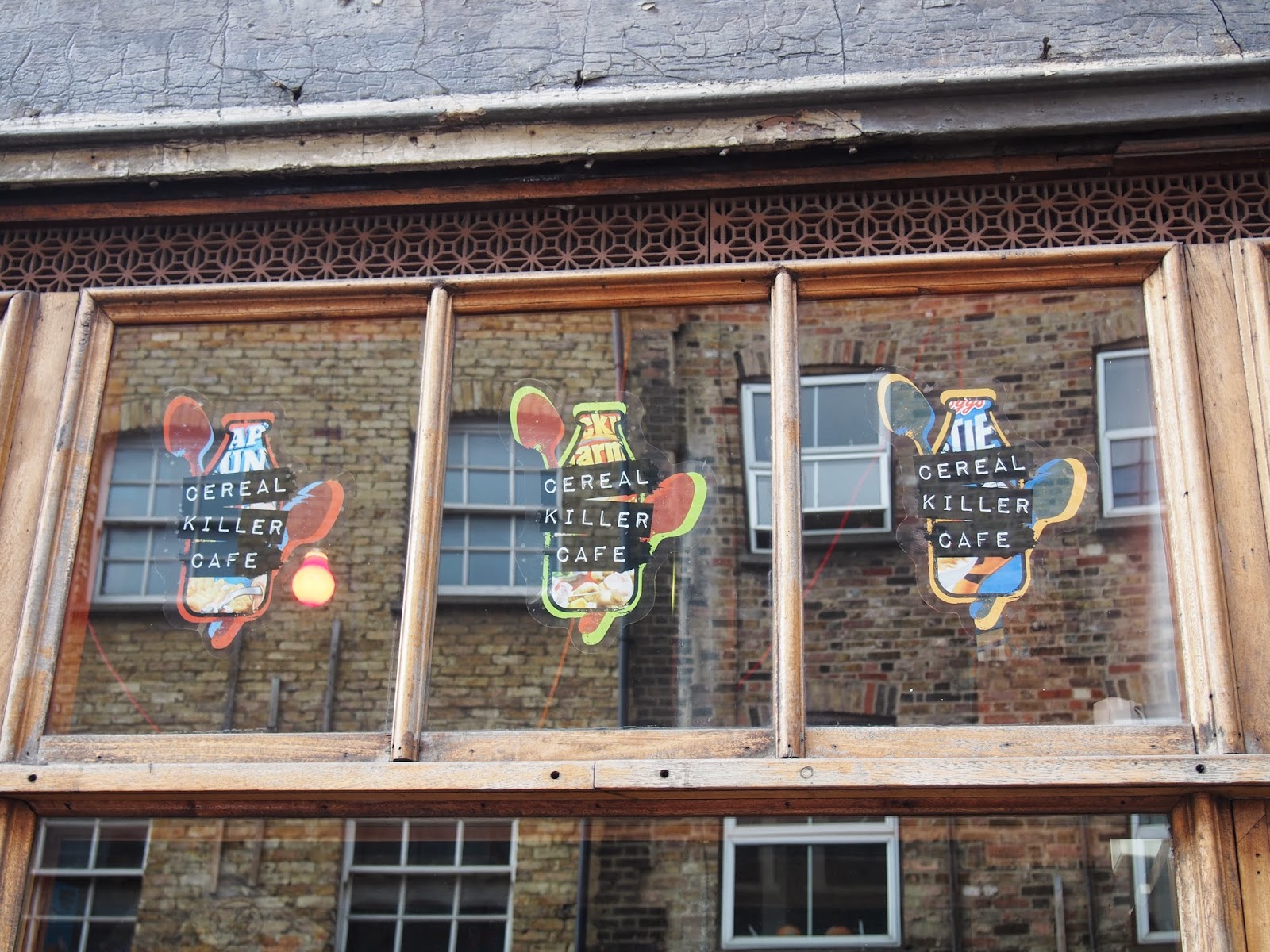 Clearly, Sofia and I were not the only people that had the idea to head on over to this spectacular place on a sunny Sunday afternoon. A queue made its way out of the door and along the street, but it was so worth it. 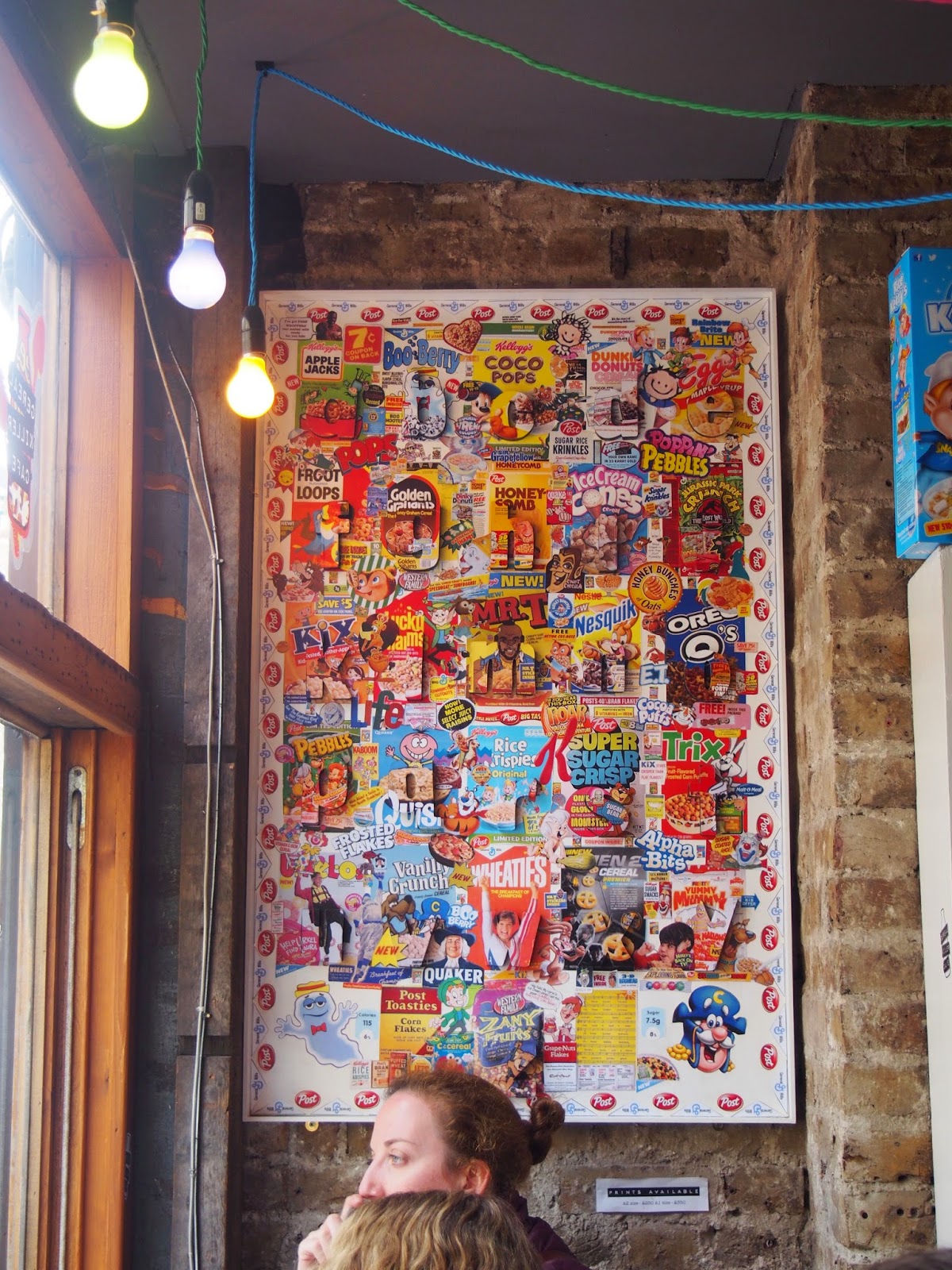 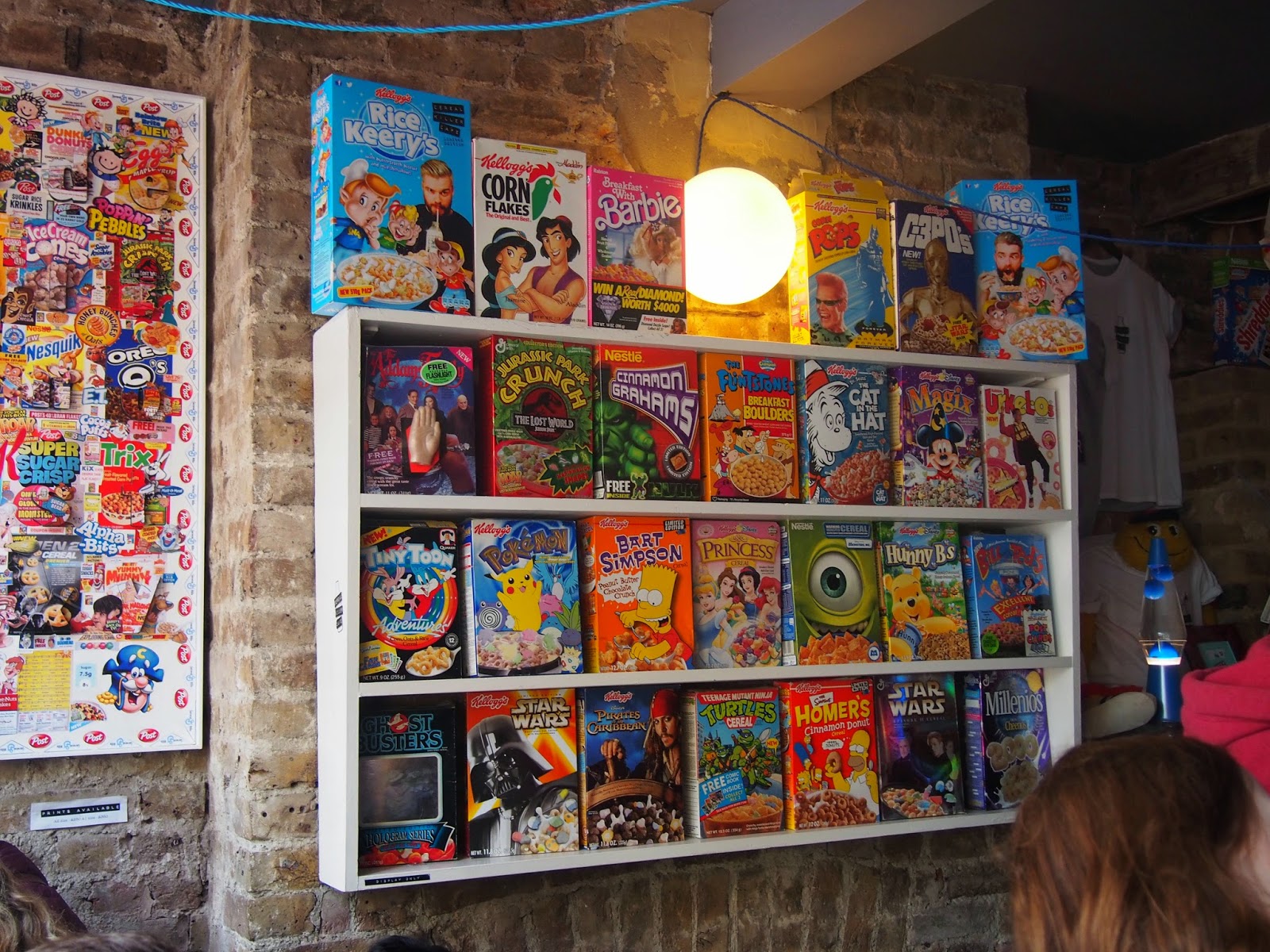 As we entered, I few of the wall displays made me reminisce to the my childhood. Some of the cereals that I used to eat as a child, that actually got discontinued here in the UK for being so unhealthy and sugary. I was heaven, literally. Even some of my favourite childhood shows had made their way into their very own cereal too. I was had my heart set on what I wanted… until I turned the corner… 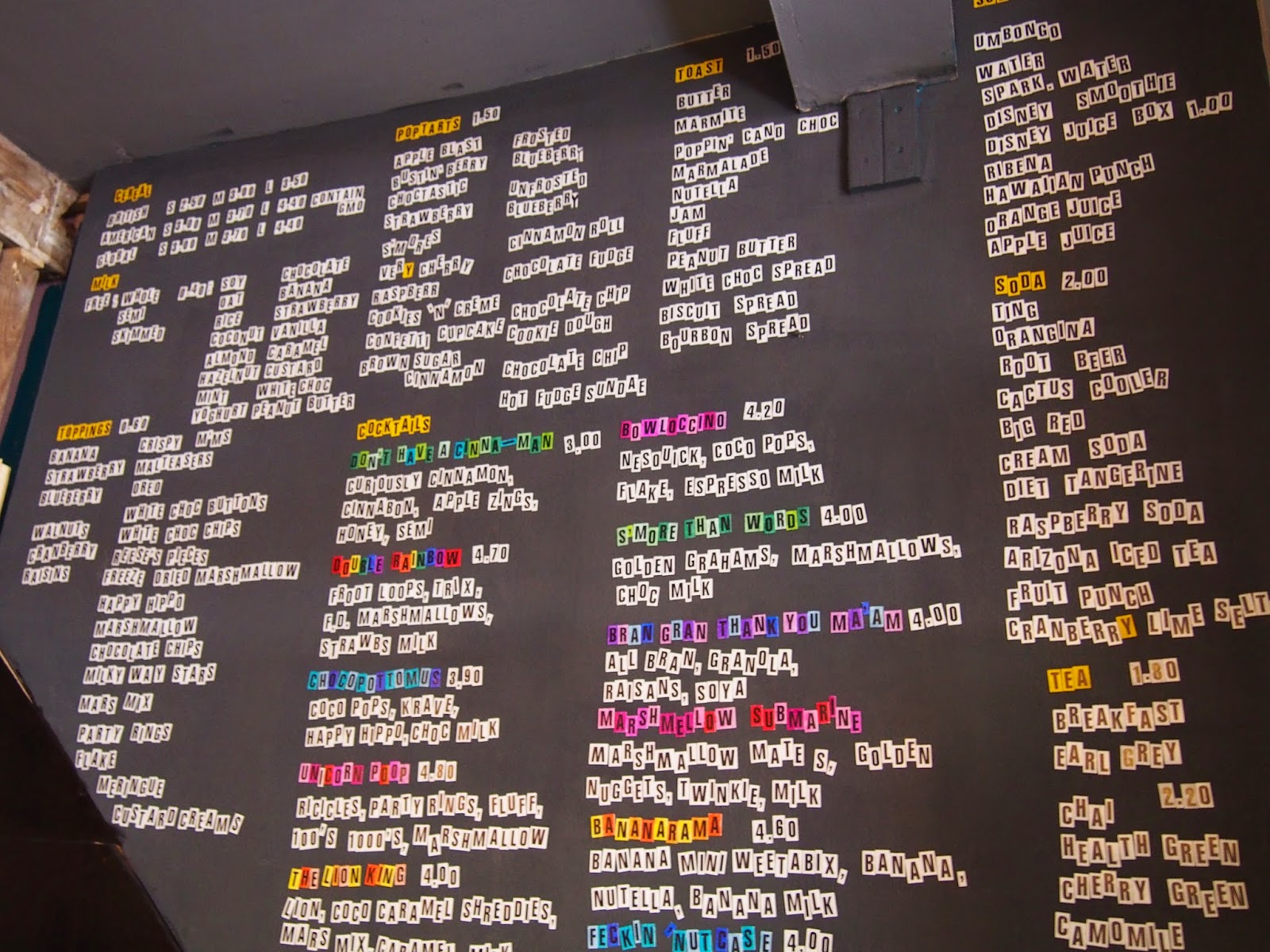 Firstly, what was the most amazing and funkiest menu I have ever seen. From different flavoured milks to cocktails and poptarts. I definitely was not ready for so much choice. The different cereals did not fail to amaze me though, especially as they served unicorn poop… YES… UNICORN POOP!!! 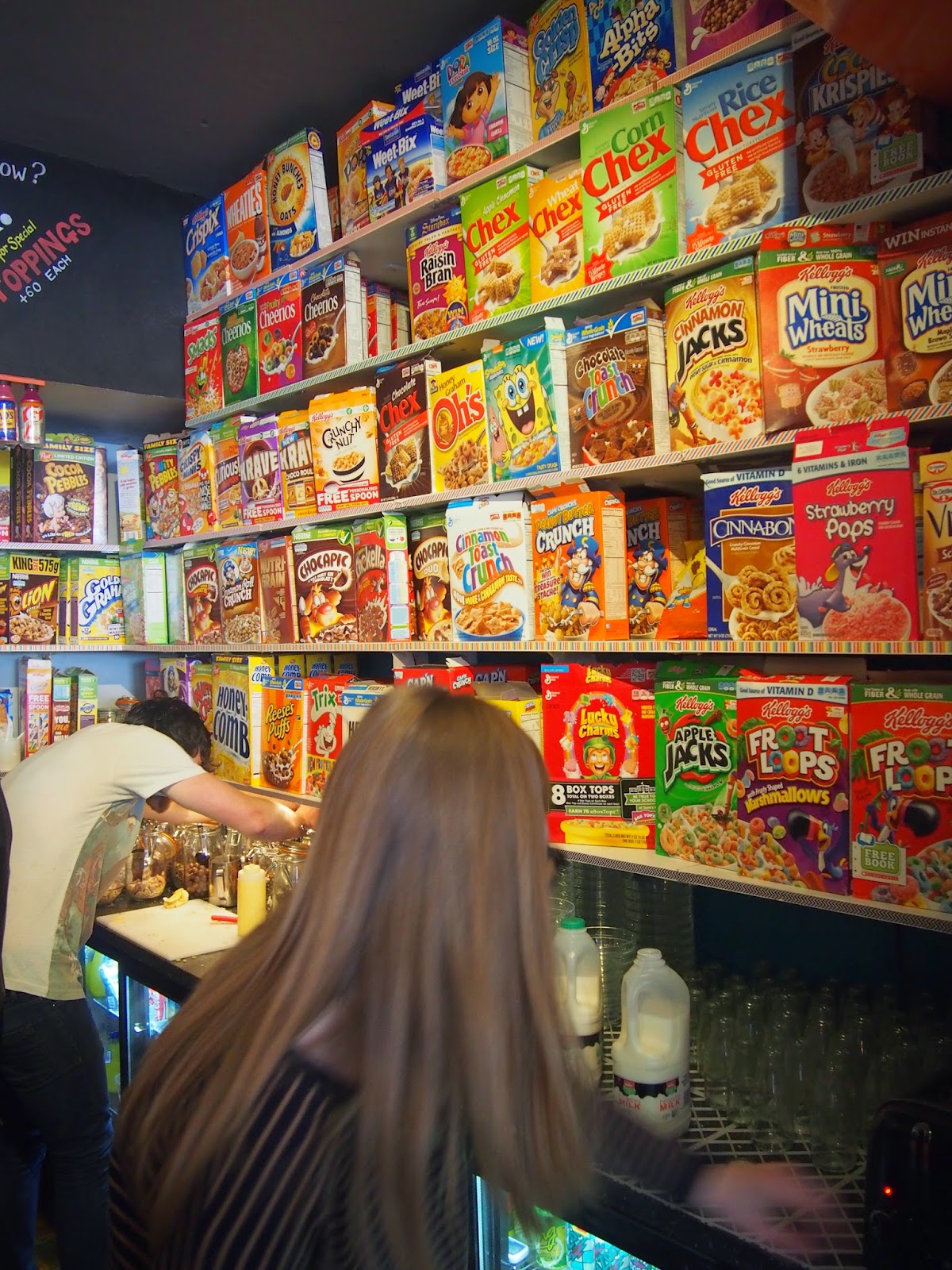 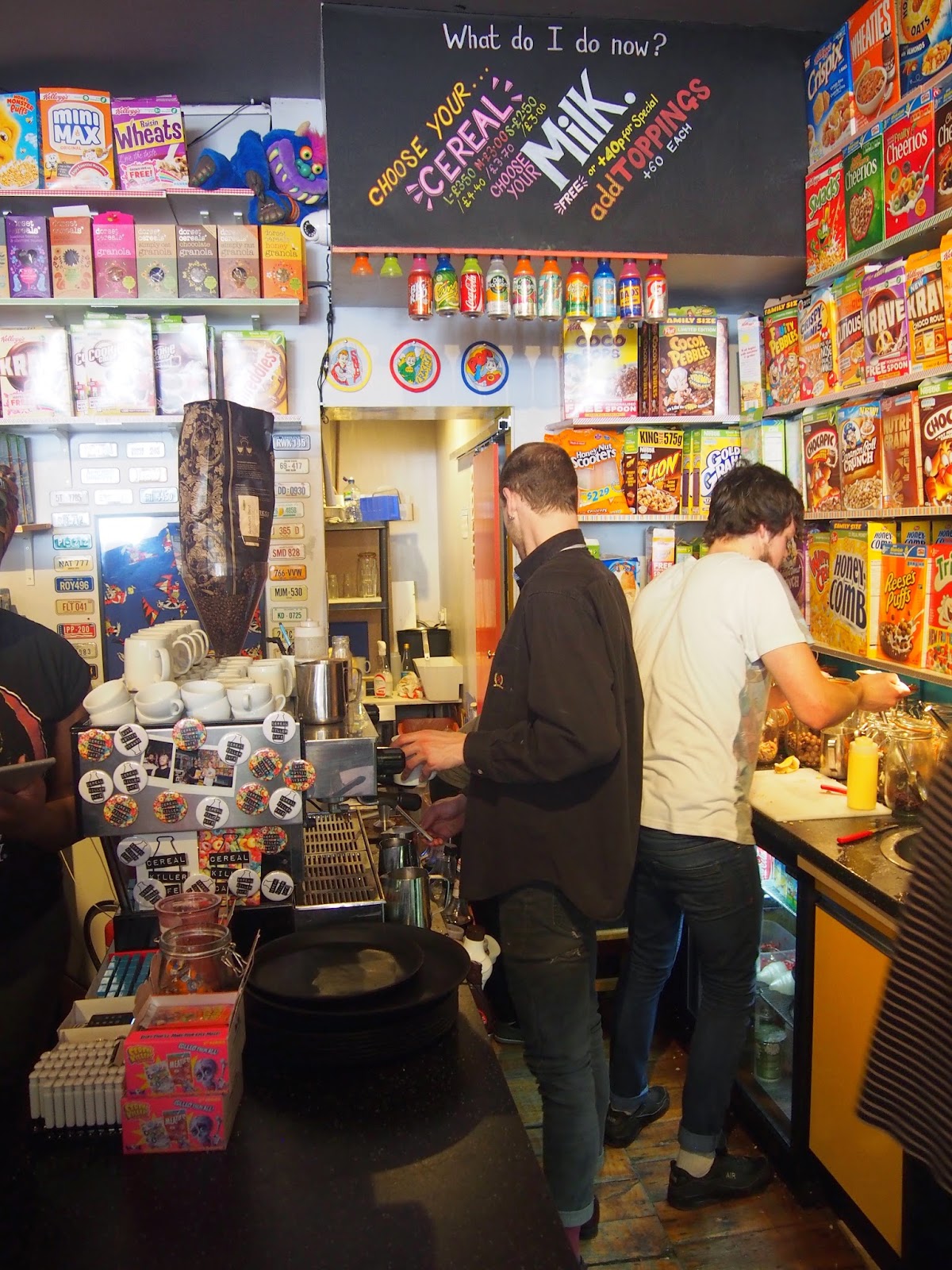 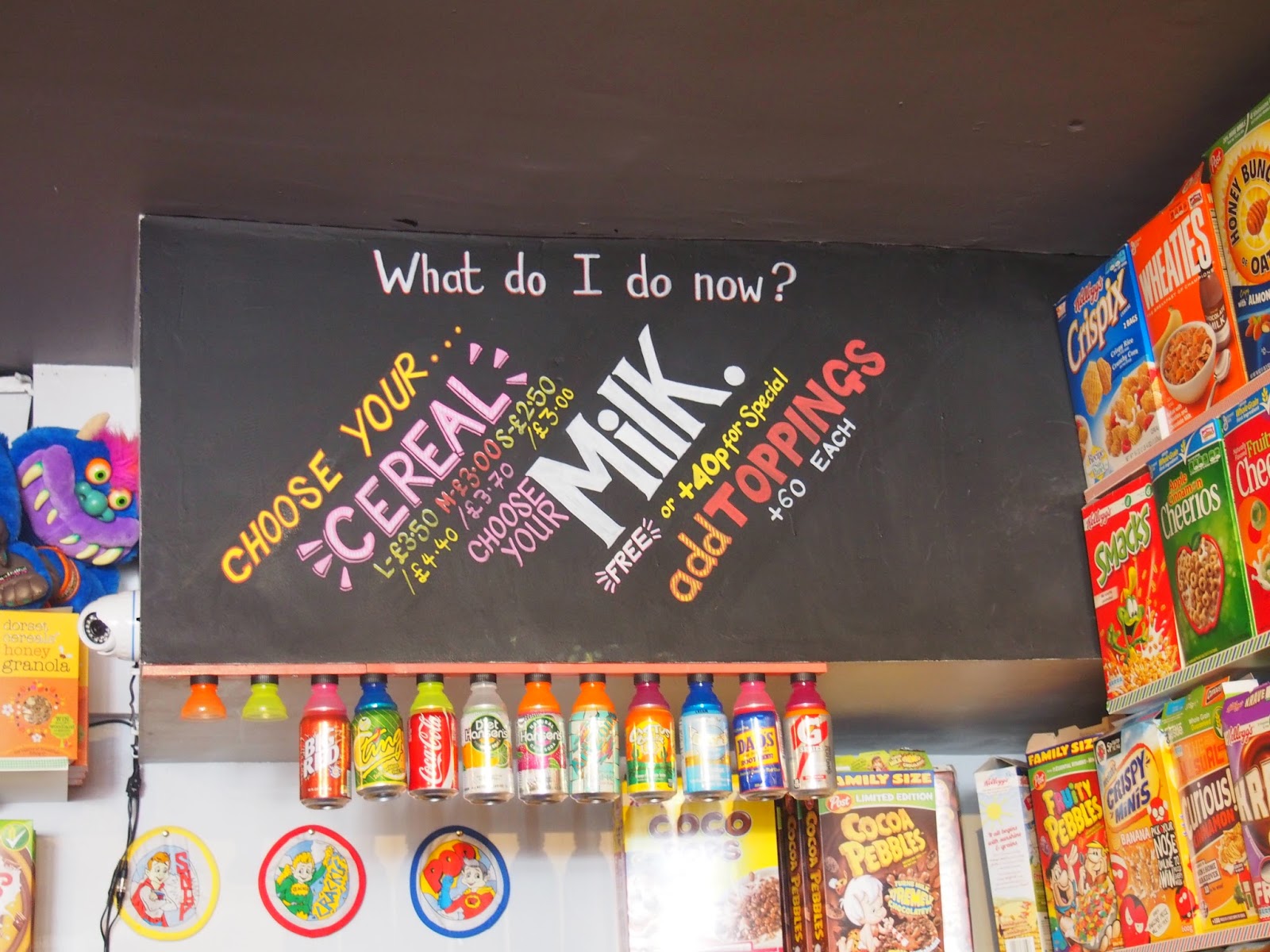 I will never understand how people even make a choice here, but I went with my gut and chose a cereal that I had been dying to try for ages, Lucky Charms. A bowl full of American, marshmallow sugary goodness… Mmmm! But…how could we go and just get cereal? So we had to go for some pop tarts too… it only felt right! 😉 Sofia went for the Apple Blast pop tart and I went for the Confetti Cupcake. 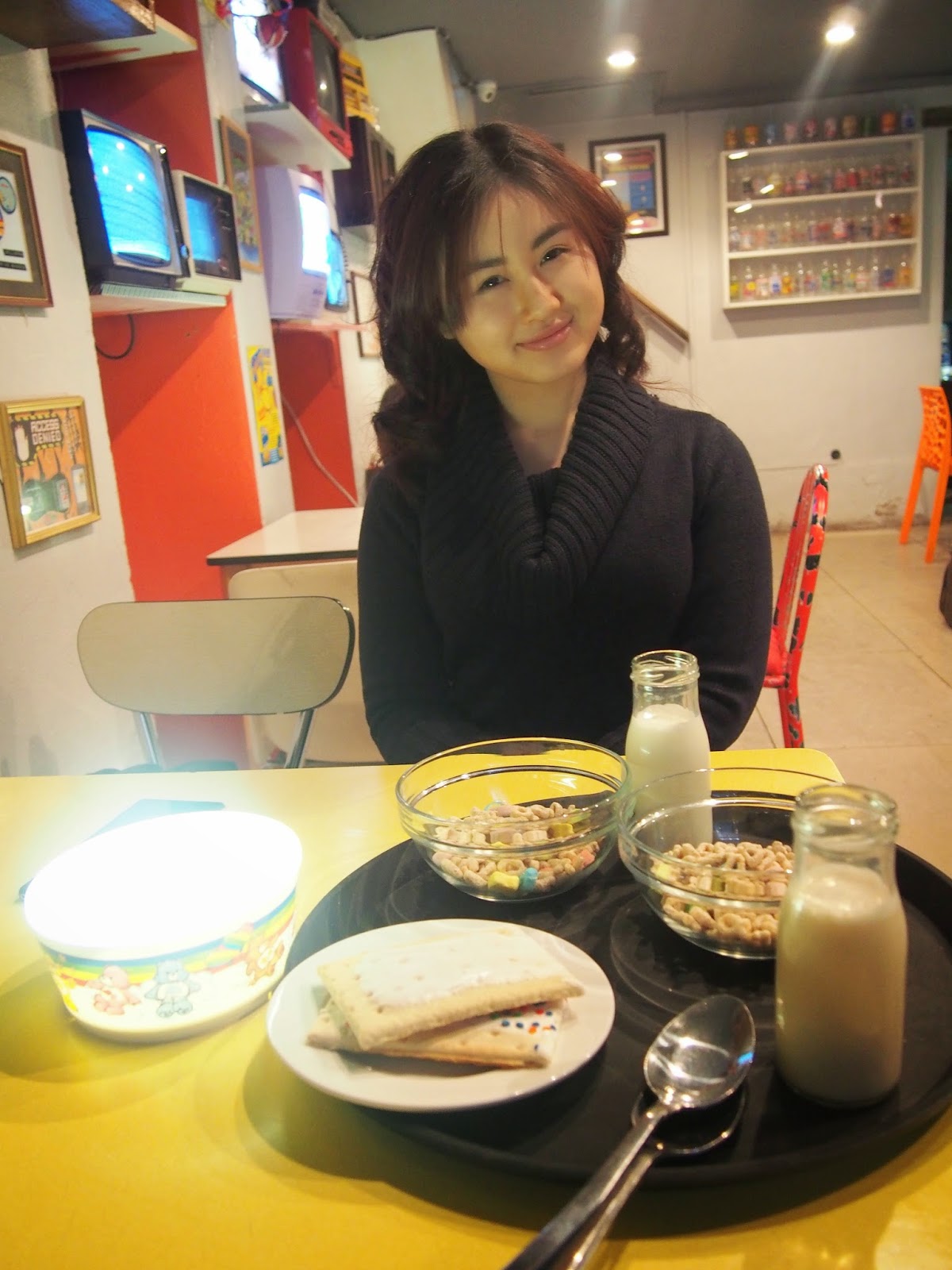 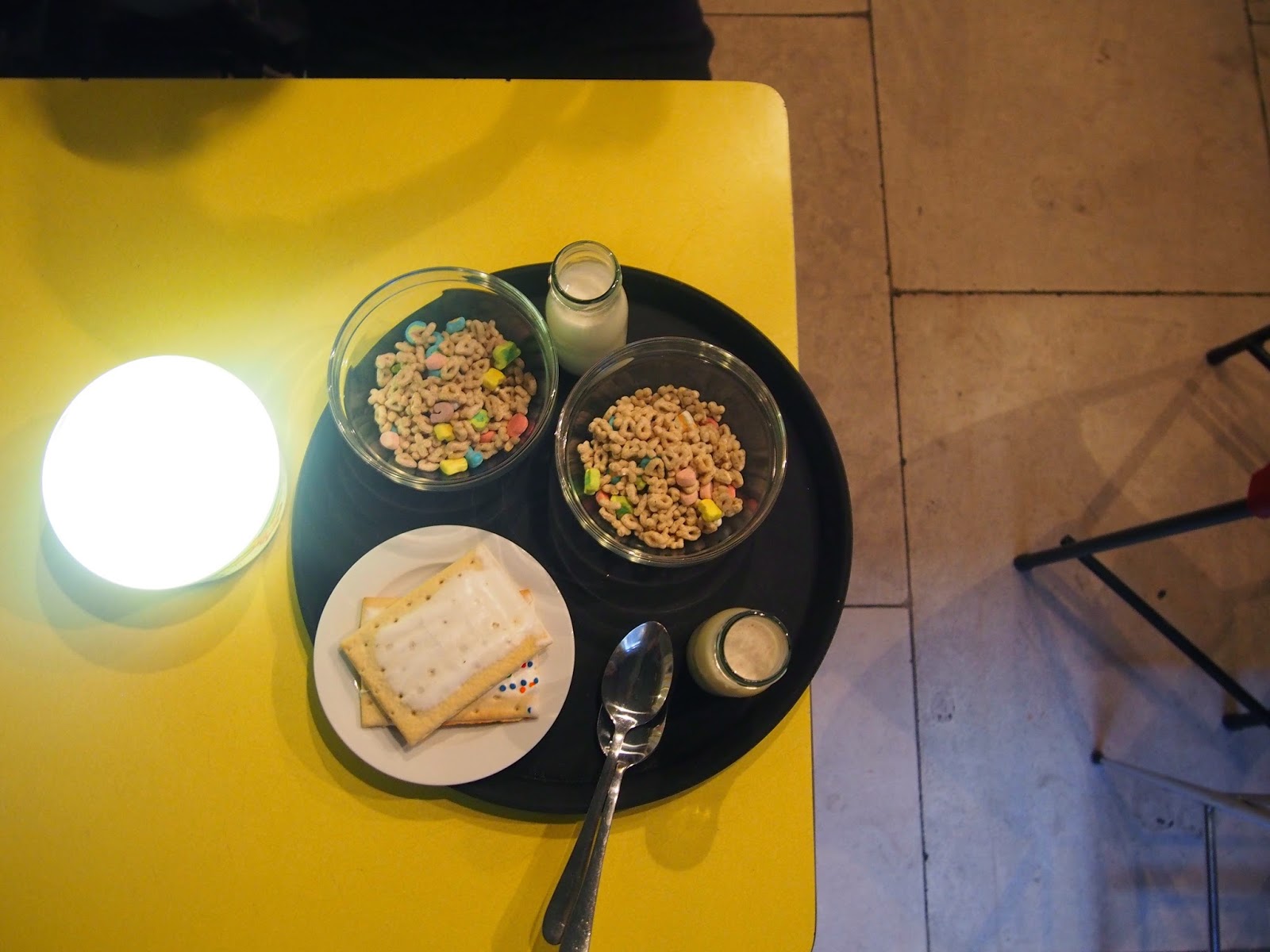 That was not all though, we even went for crazy milk flavours! I had to go for vanilla, as I love anything and everything that is vanilla flavoured. However, Sofia was a bit more adventurous and went for caramel flavoured milk which got a massive thumbs up from her. 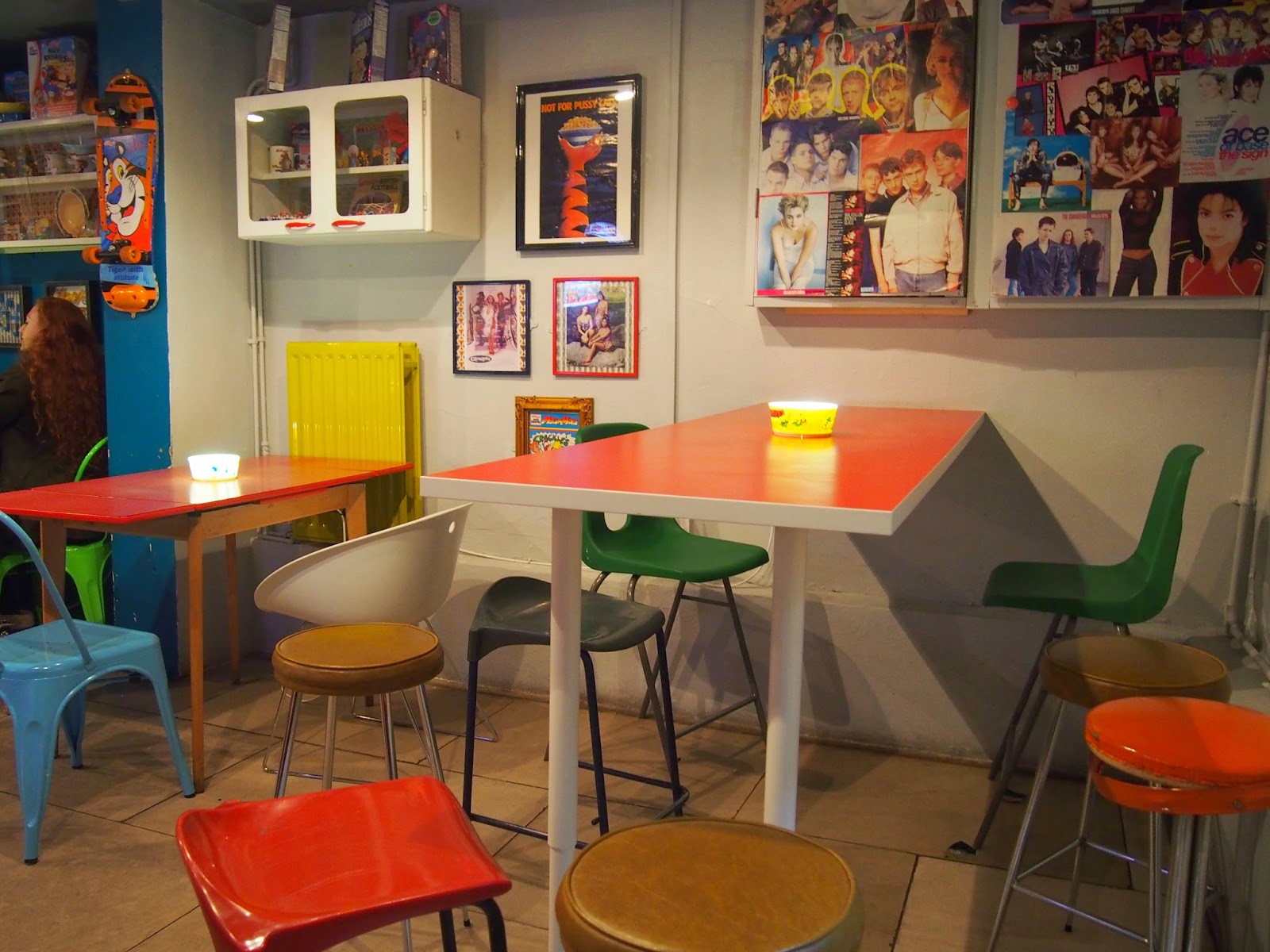 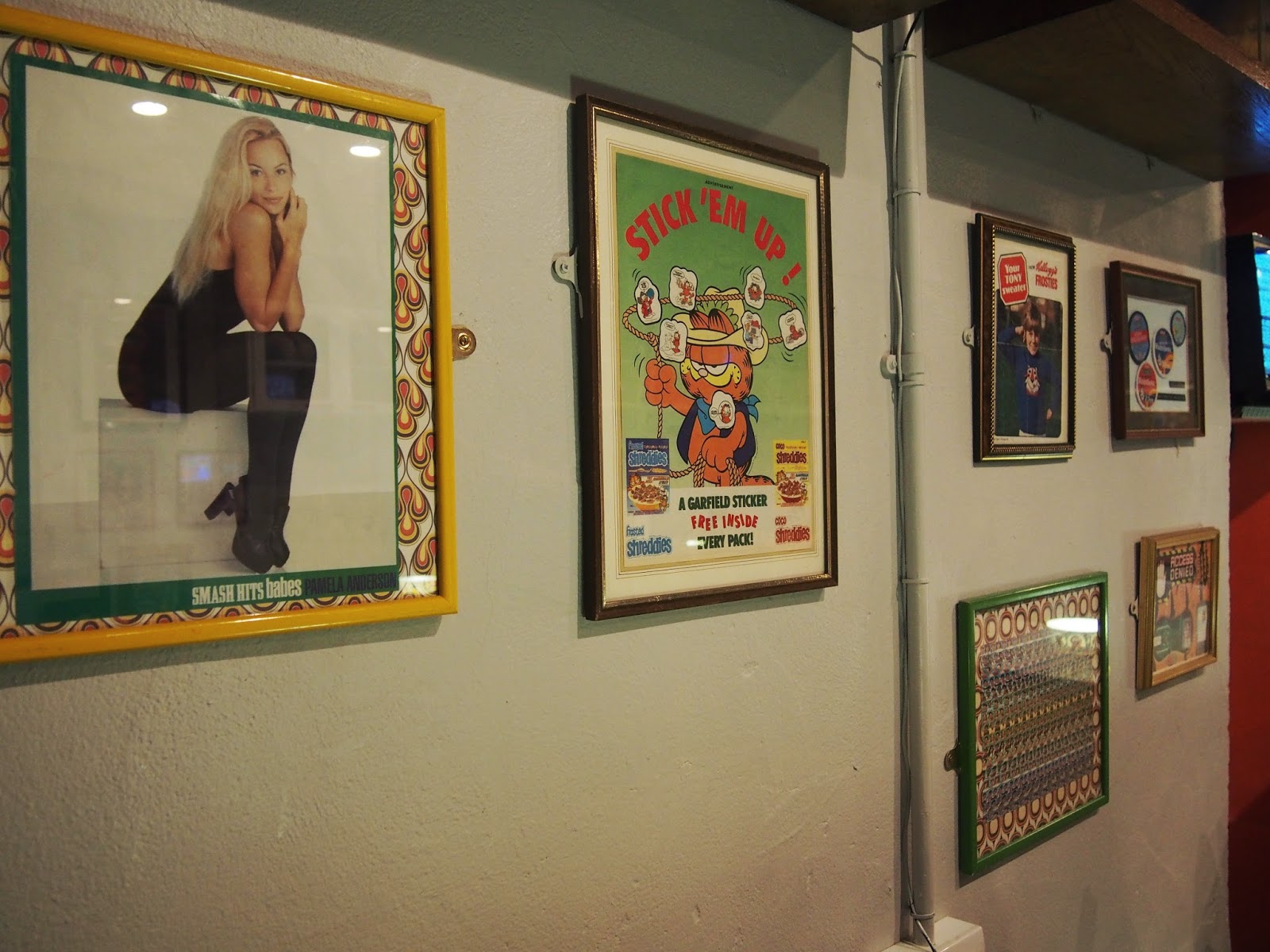 Tucking in, whilst getting fuelled with a major sugar rush we scoped out the wall displays and relived our childhood in the moment. Oh, how I would love to be a child again…
Definitely a place to check out, if you have not already, especially if you like quirky places. I already know i’m going to head back and try some more exotic cereal-milk combinations very soon!
Cereal Killer Cafe
139 Brick Lane
Shoreditch
London
E1 6SB