Wanderlust. Again, it got the better of me, my need to travel grew
greater and it was only a matter of time before the next destination was
planned. It all started in a weird and wonderful way. A surprise… yes a
surprise!  Thursday morning, we set out
at 6am to catch a 7am train from Kings Cross St. Pancras that was supposed to
be up to my cousins place in Doncaster, little did I know that it was a lie! I
kept telling my sister that we were going the wrong way, I even got a bit
annoyed after a full ten minutes of trying to get through to her but she
continued to ignore me. We approached the gates for the Eurostar, when she
finally stopped to listen, but before I could utter another word, she
exclaimed… “We’re going to Paris, HAPPY 21st BIRTHDAY!”
Crazy. I was so shocked. I had initially planned on going to Paris
with some university friends, however due to unforeseen circumstances they were
not able to go anymore and the plan fell through. My sister took it upon
herself to book the trip for us instead to fulfil my wishes. So happy, I grabbed her and hugged her
with a massive grin on my face. I repeated, in my head over and over… we’re
going to Paris… we’re going to Paris… WE ARE REALLY GOING TO PARIS!!!
After a two hour Eurostar journey, which went extremely fast, we
arrived in Gare Du Nord! Anxious waiting for the doors to open so we could go
off and explore Paris!
We took the Metro to our hotel, checked in, dropped our bags and
headed out! First stop, food. Always food.
Passing by, a lovely authentic Italian restaurant caught our eye.
Greeted and seated, studying the menu, I decided to go for a traditional
spaghetti bolognese and my sister went for a chicken and mushroom pizza. 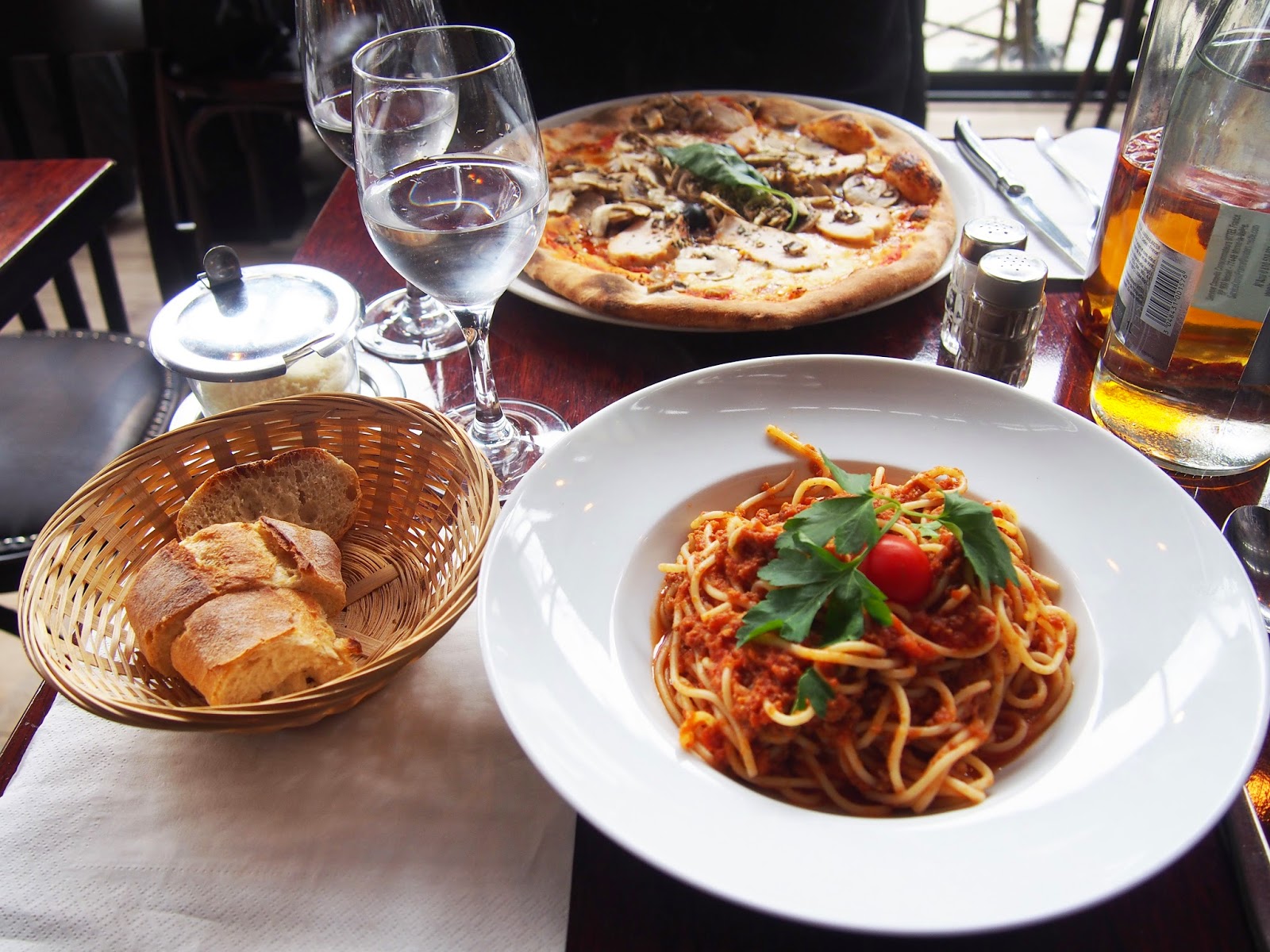 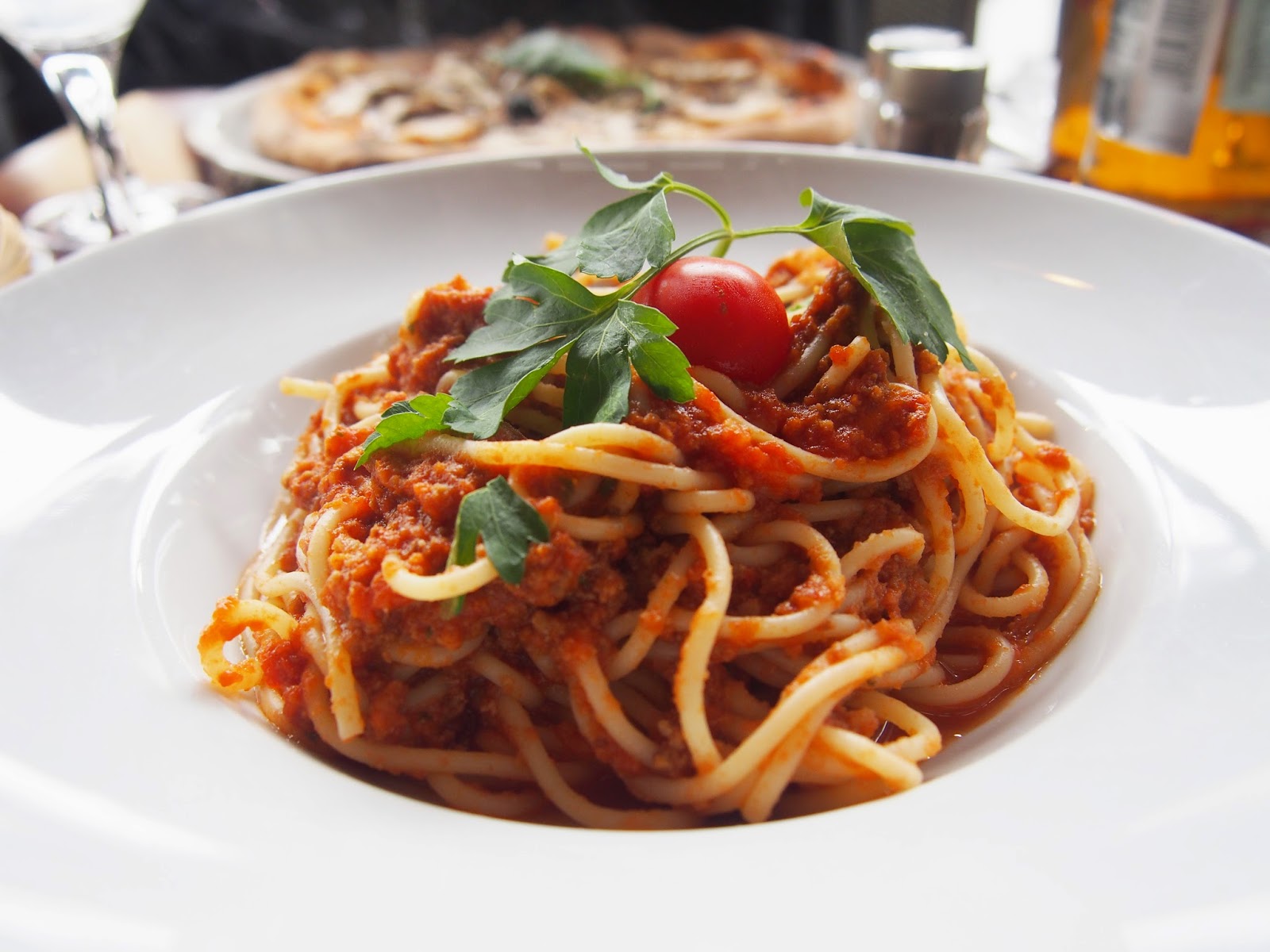 Positively the most delicious Italian lunch we have had and of all
places… in Paris!
After a gorgeous lunch, we decided to pop off and visit the Eiffel
tower first. Magnificent views, even with a grey overcast, it still looked
beautiful in its entirety. Messing around, trying to get some cool shots of it,
we were pleasantly invited to a nearby stall by the smell of delicious, warm
crepes. Oh so French indeed, smothered in nutella it was a perfect treat for a
wet day. 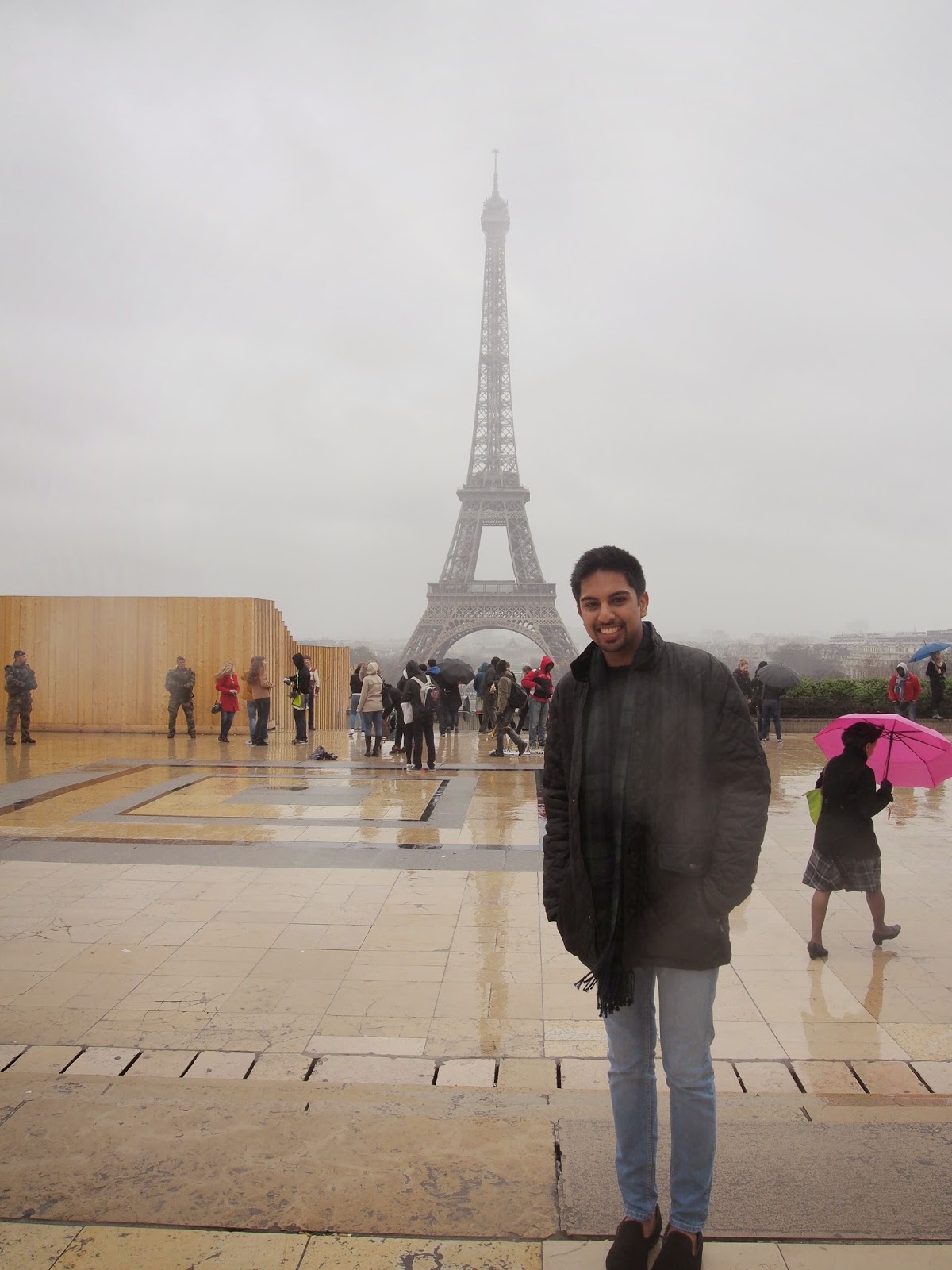 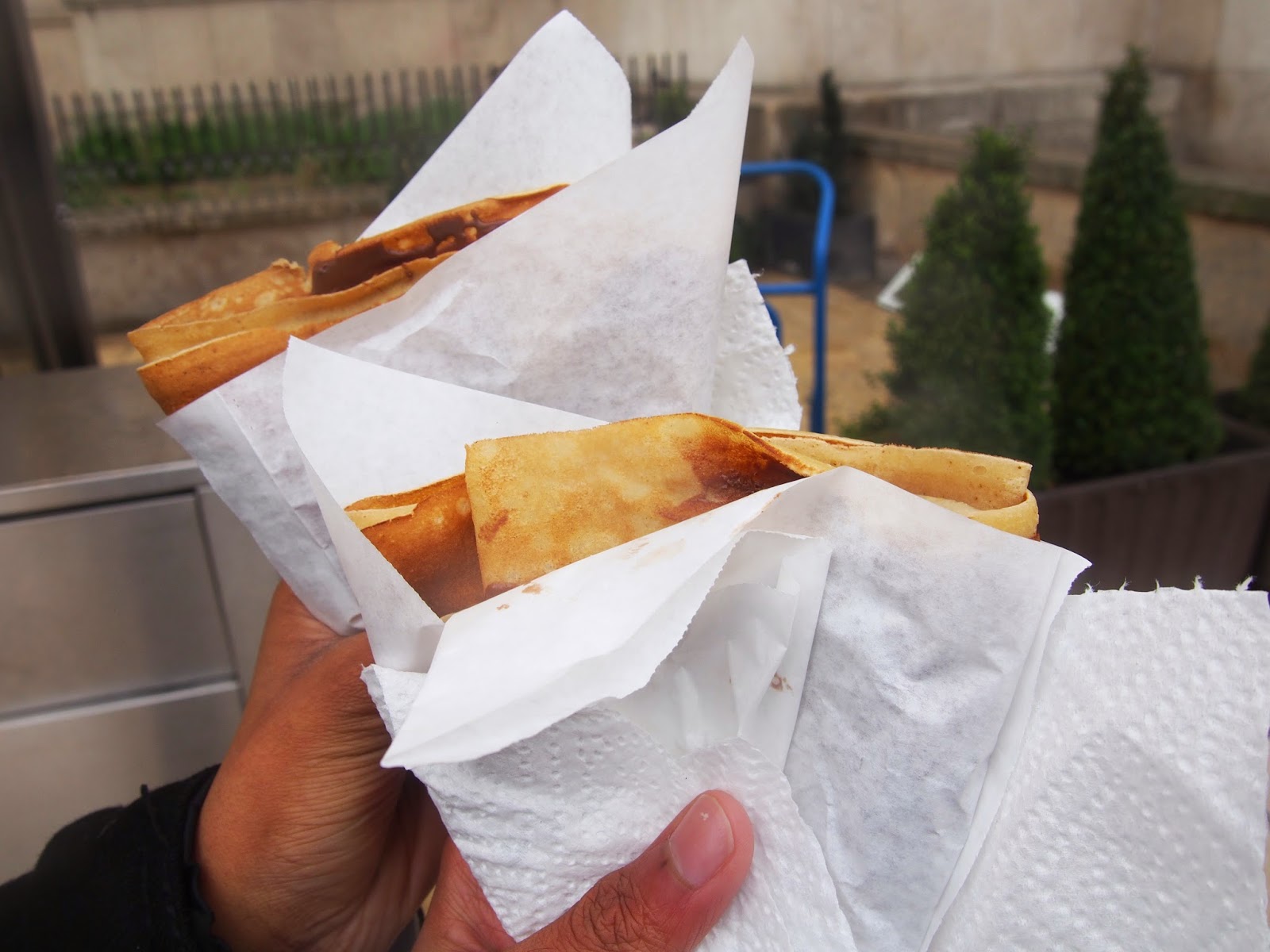 To escape the rain before our Eiffel tower experience we popped into
a couple of museums.

First off, Cité de l’architecture, a museum dedicated to well made and
perfectly designed architecture from around Paris. I’ll let the pictures do the
talking here… 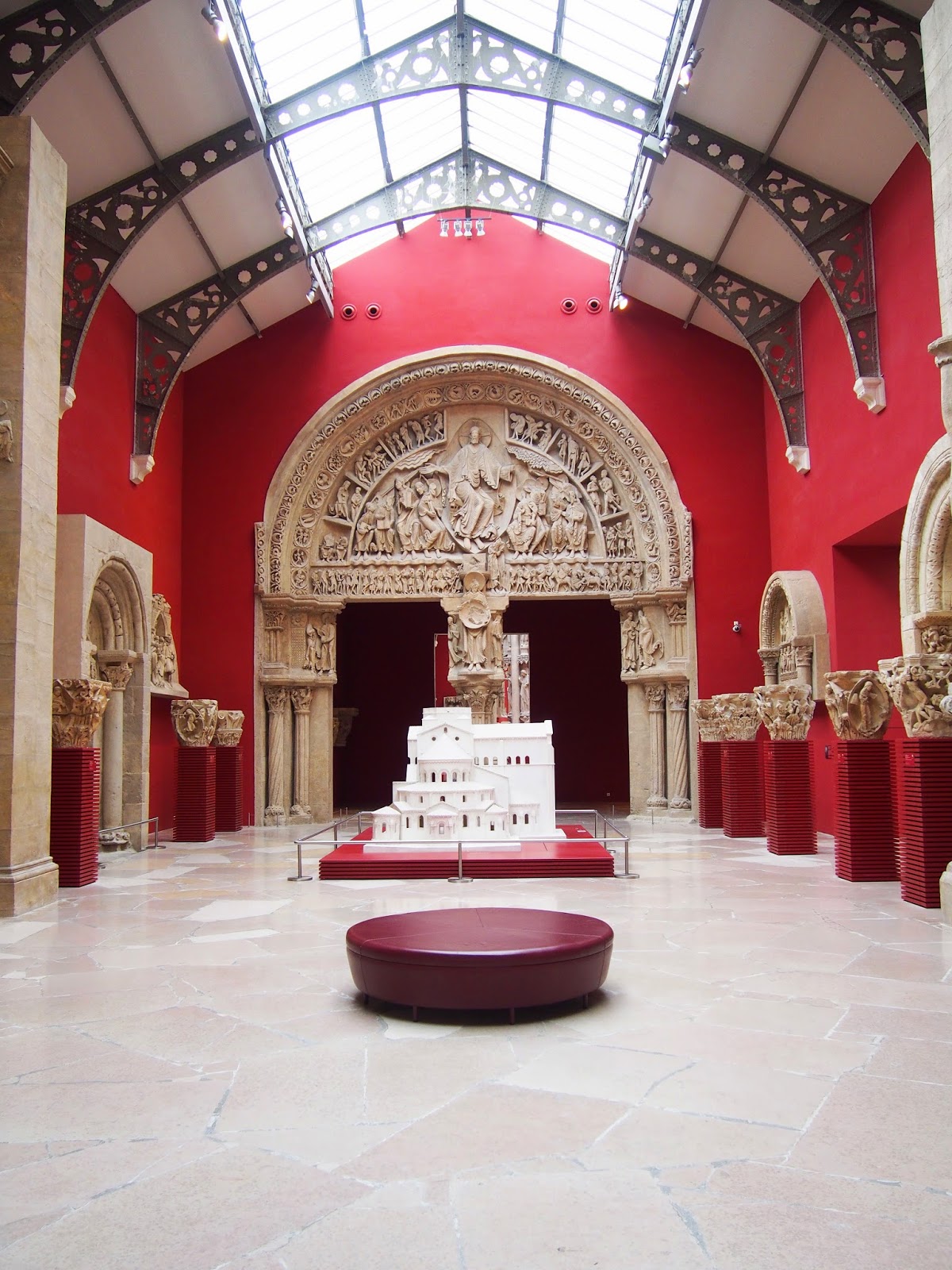 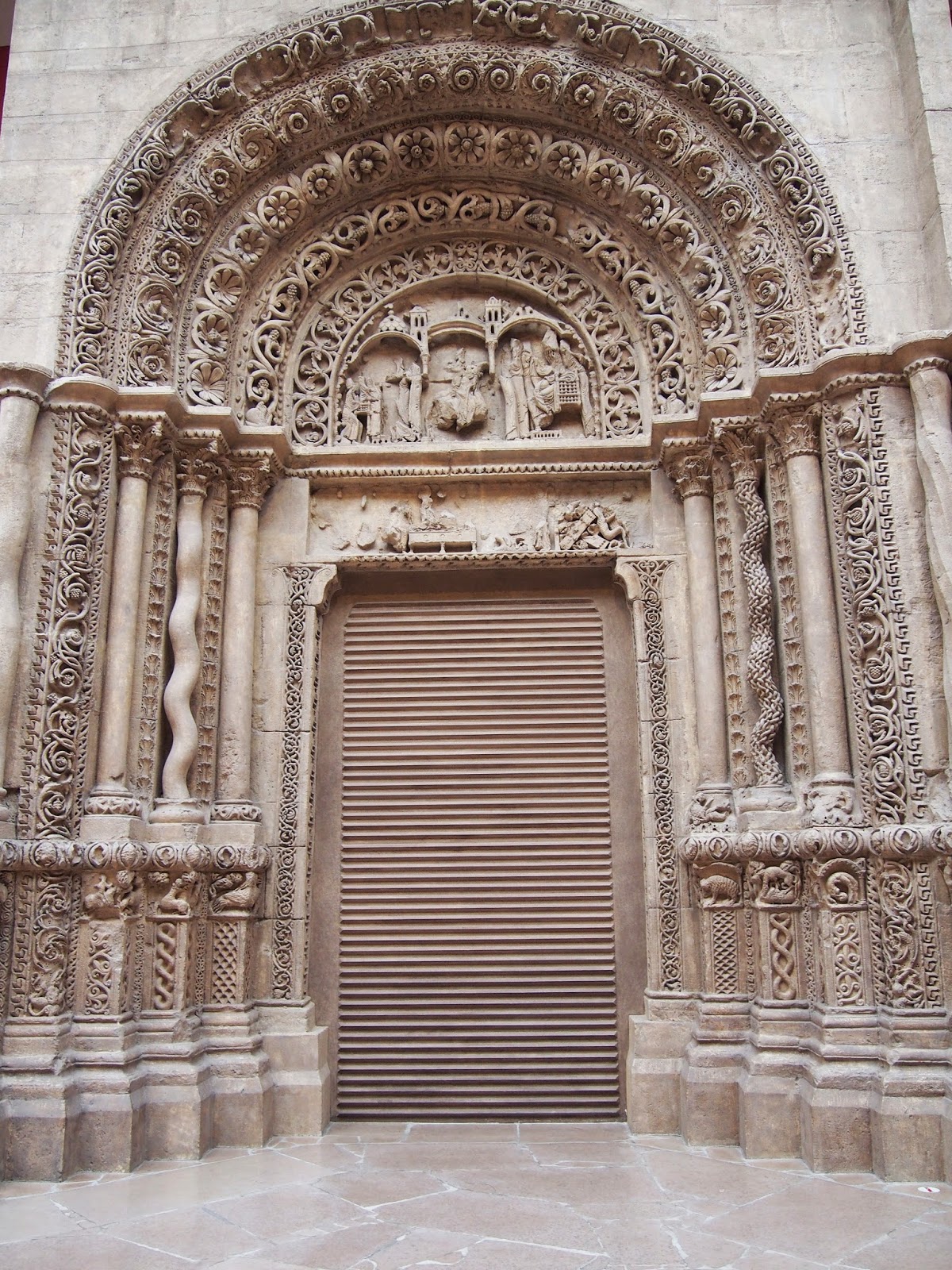 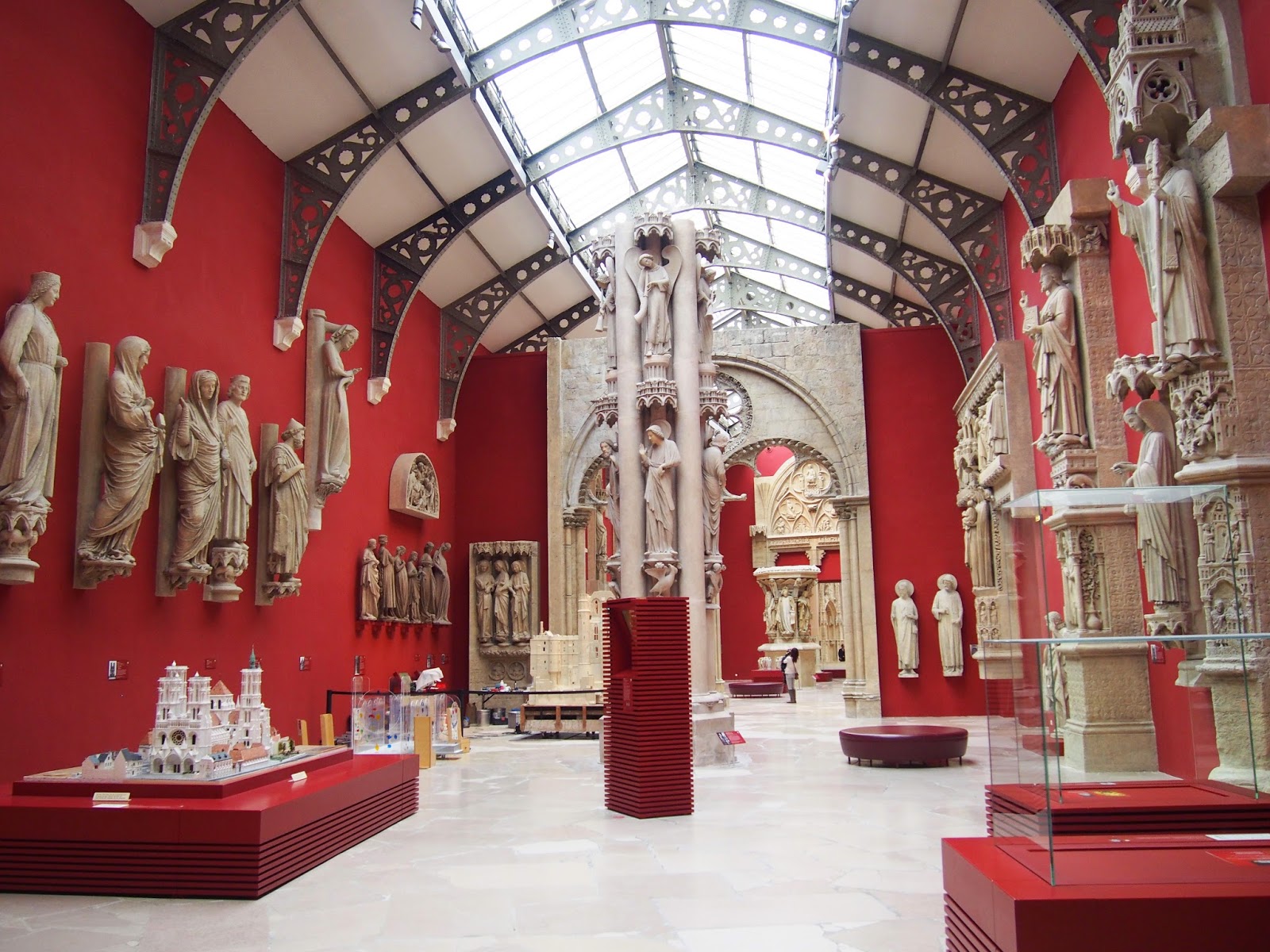 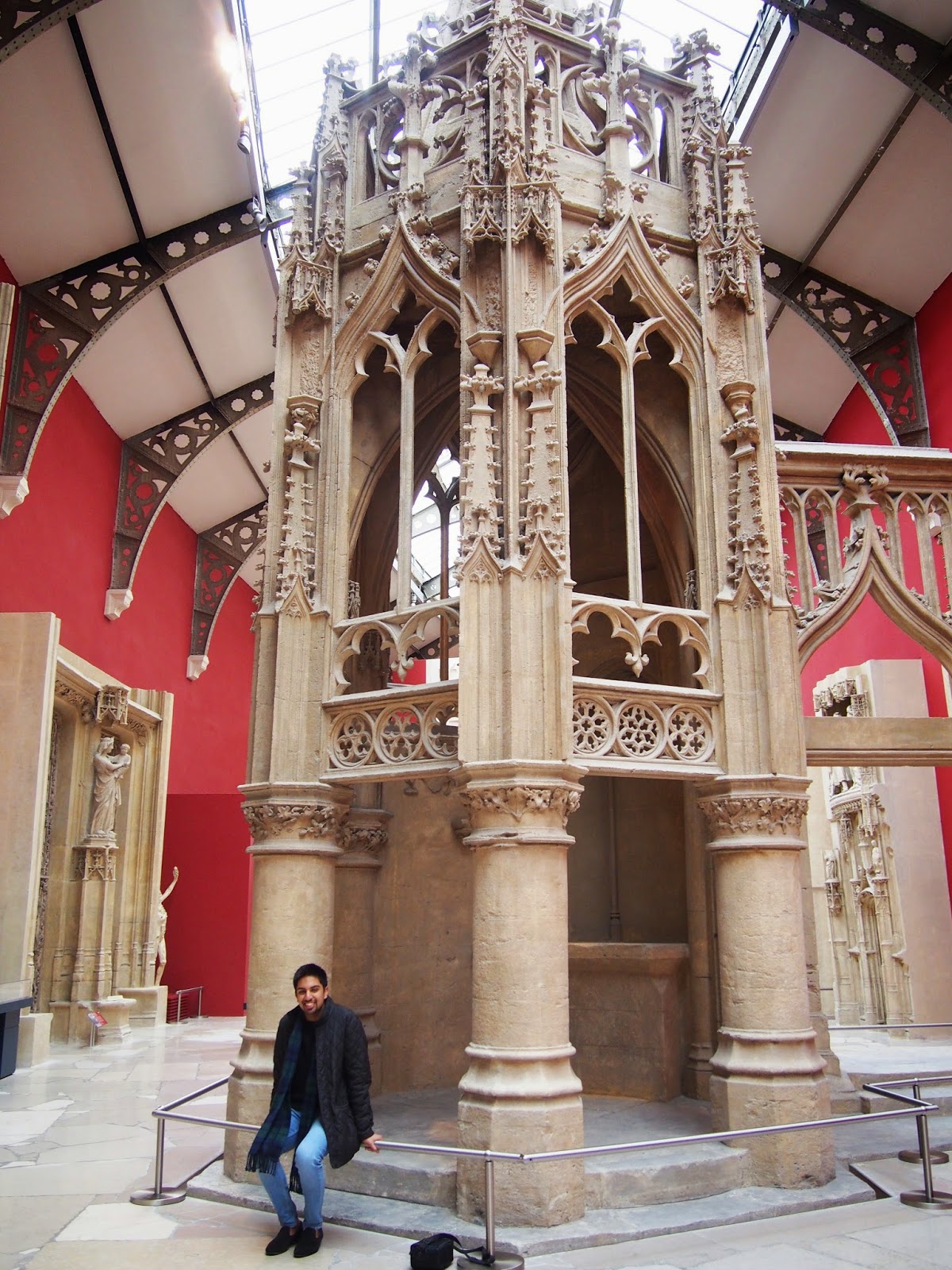 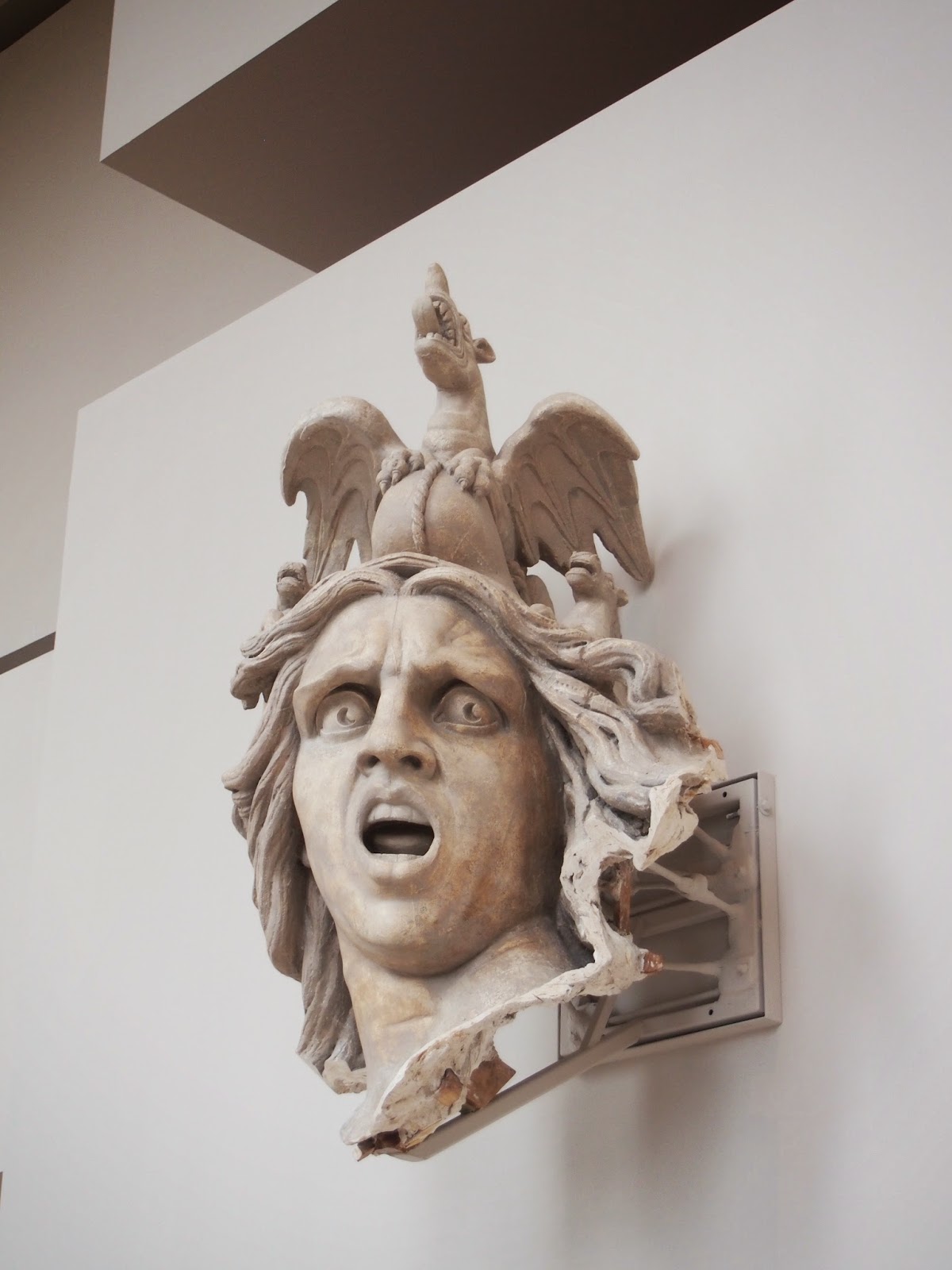 Next, we hopped on over to the
other side of the Eiffel tower to check out the Musée national de la marine – a museum
dedicated to the war times, where ships were used for cargo and heavy duty
transport. Some were even used as airplane storage and runways, to quickly get
into the air from the middle of the ocean. Very cool! 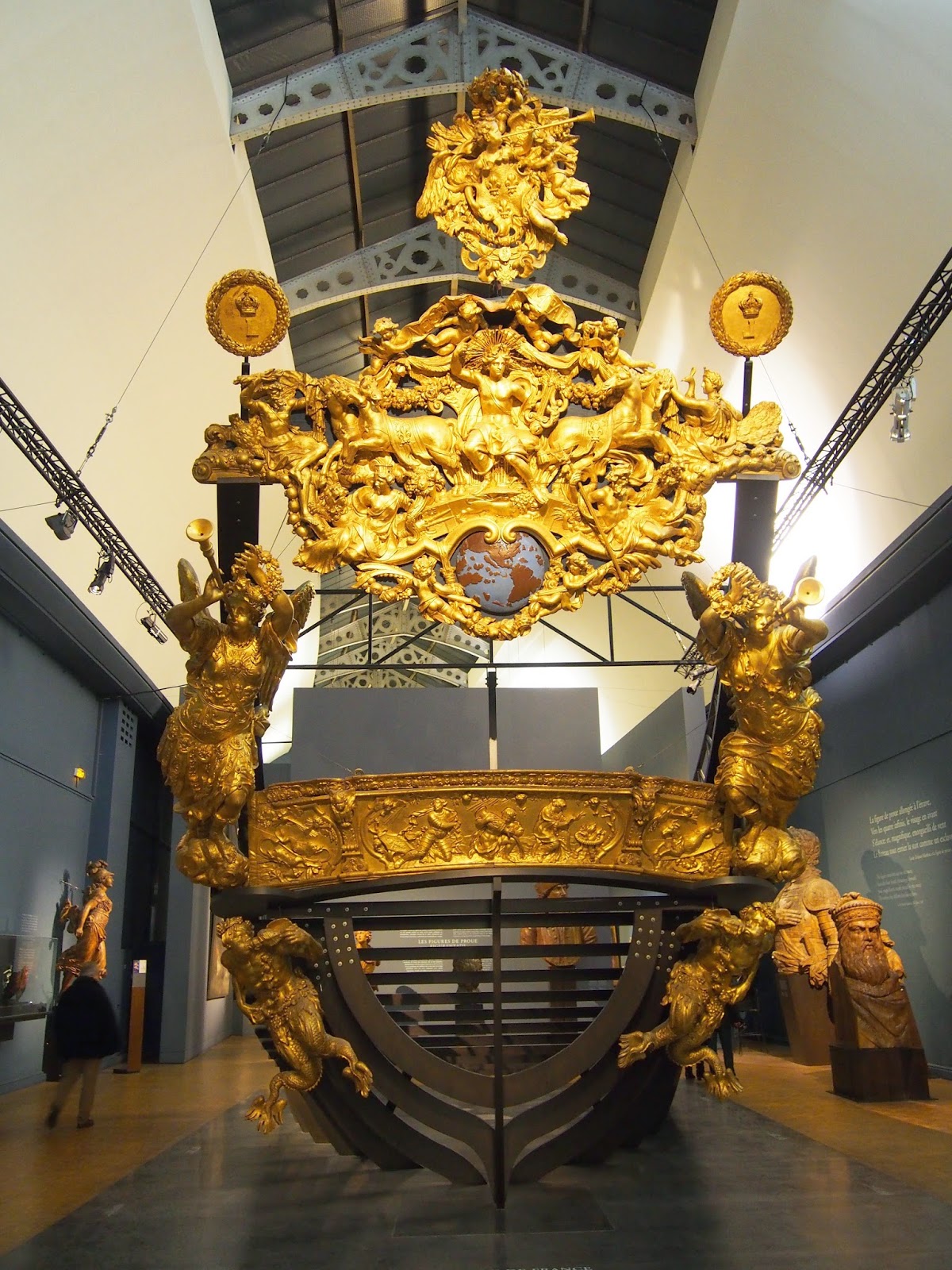 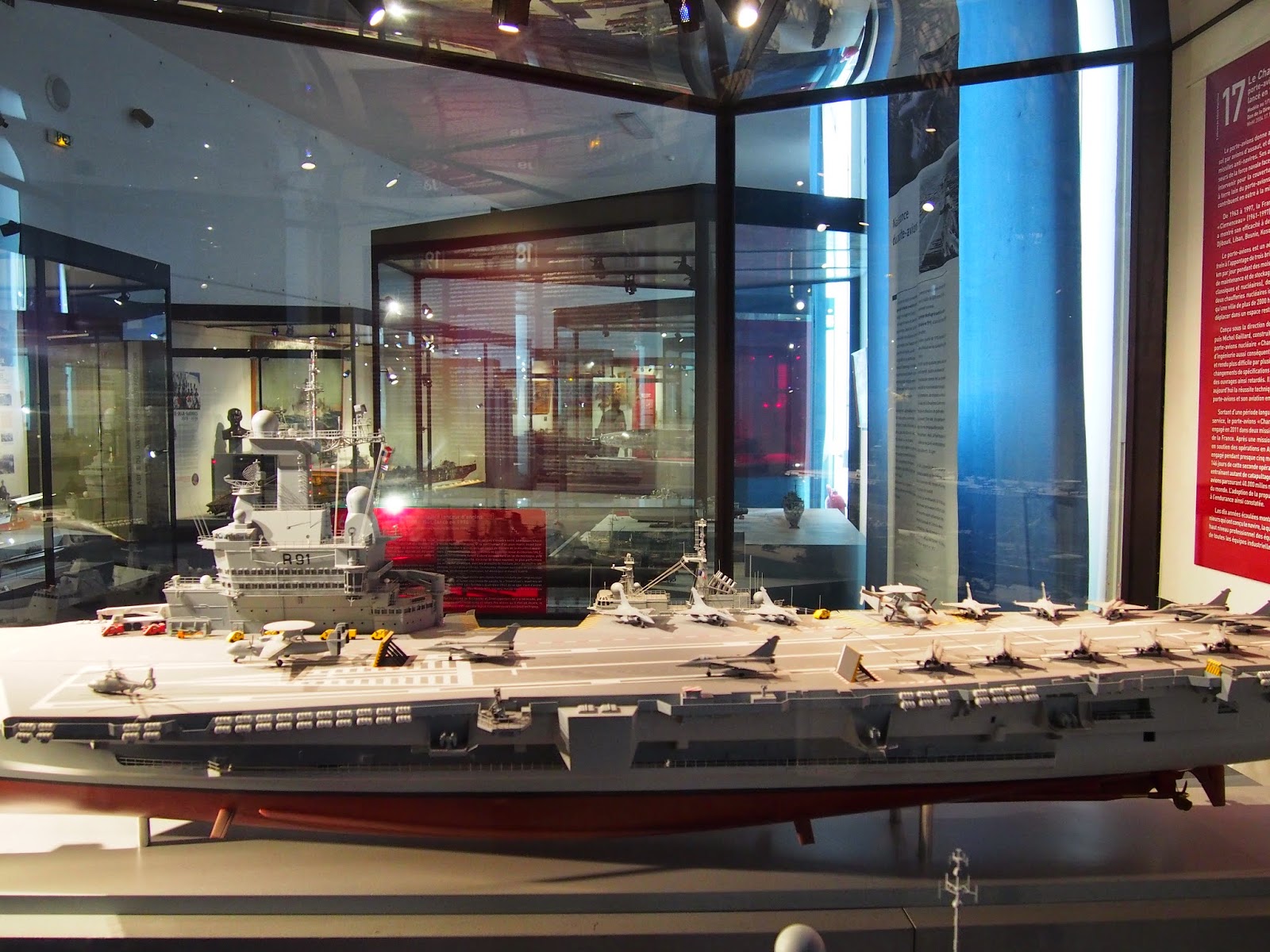 With some time still remaining, we
made a flying visit past the army museum, which had a beautiful golden roof.
There is just something so great about the buildings in Paris, they all give
off an Italian vibe and look absolutely stunning. 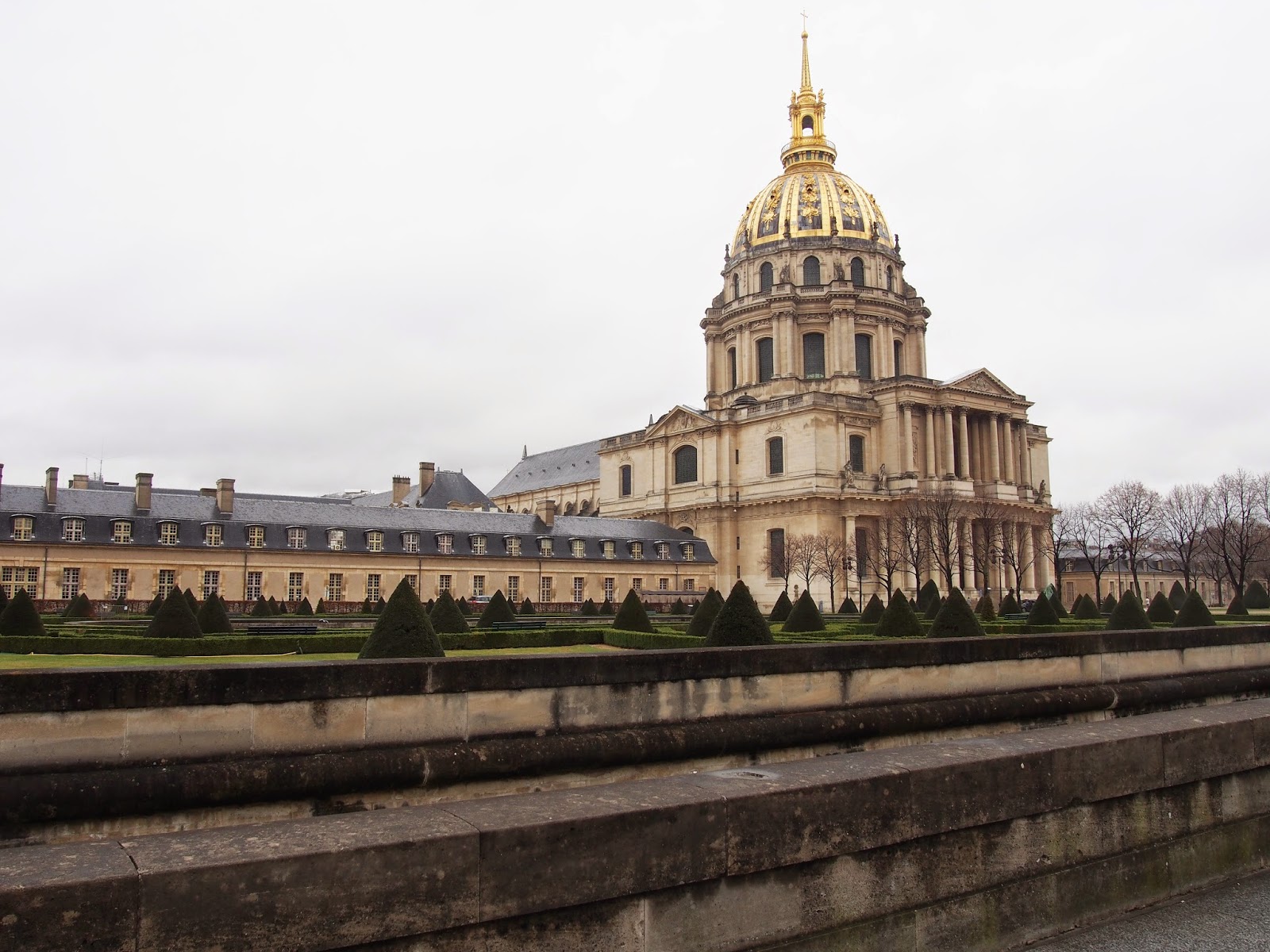 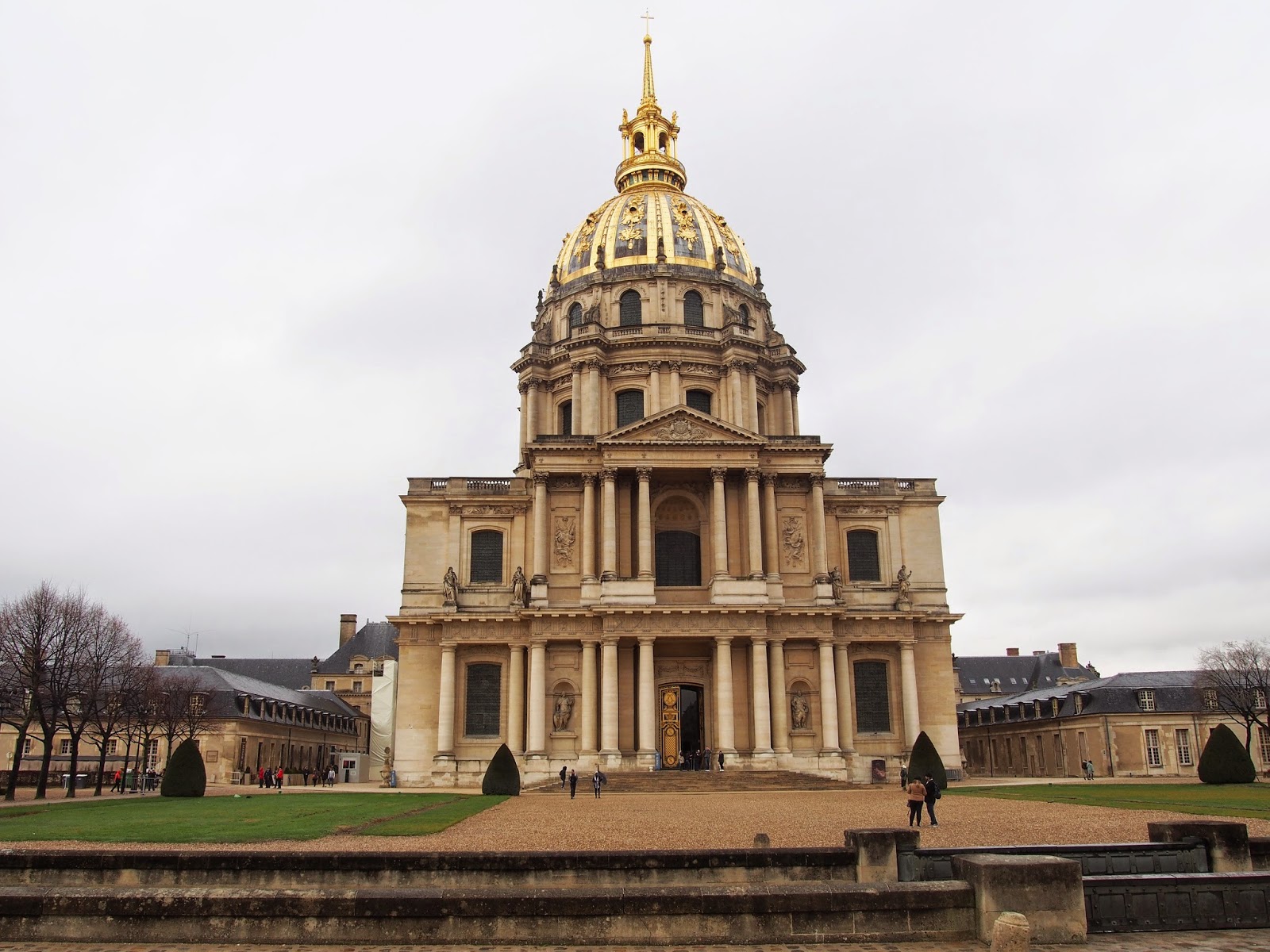 By this point in the day, it was
time for us to head up the Eiffel tower and get a birds eye view of Paris.
Perfectly timed, the clouds started to rapidly disperse and the beautiful Parisian
sun came out, giving the city a lovely glow. 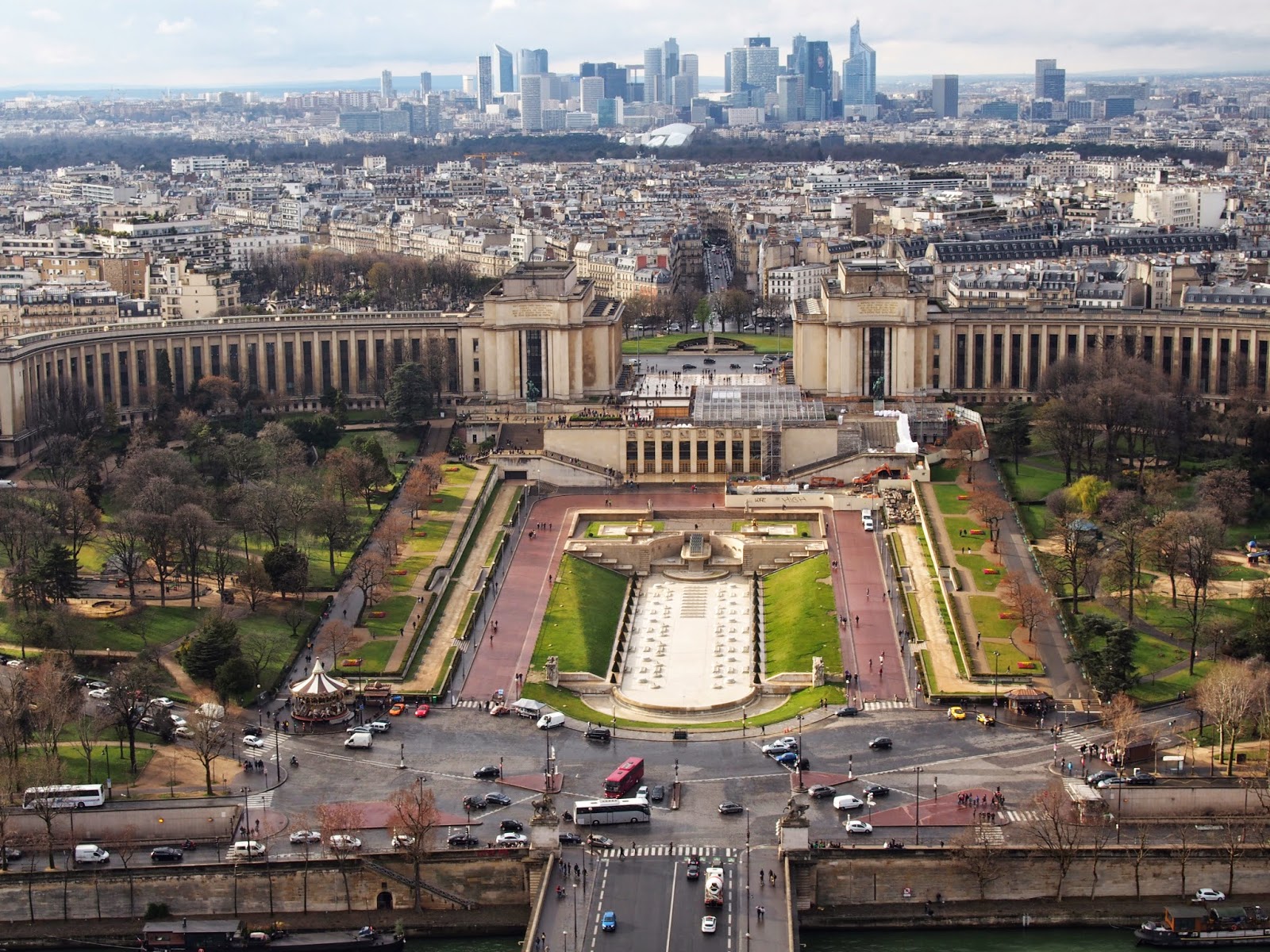 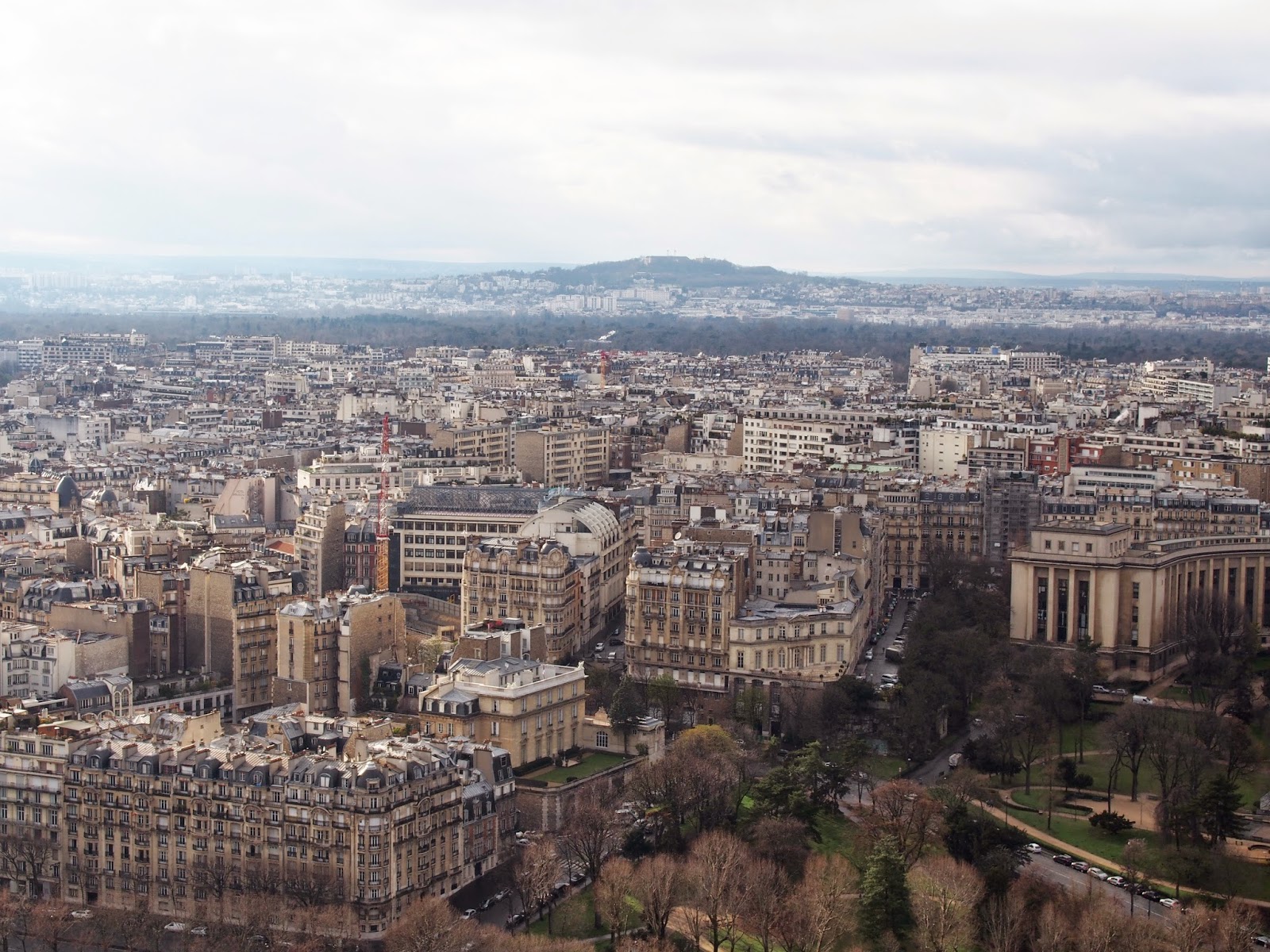 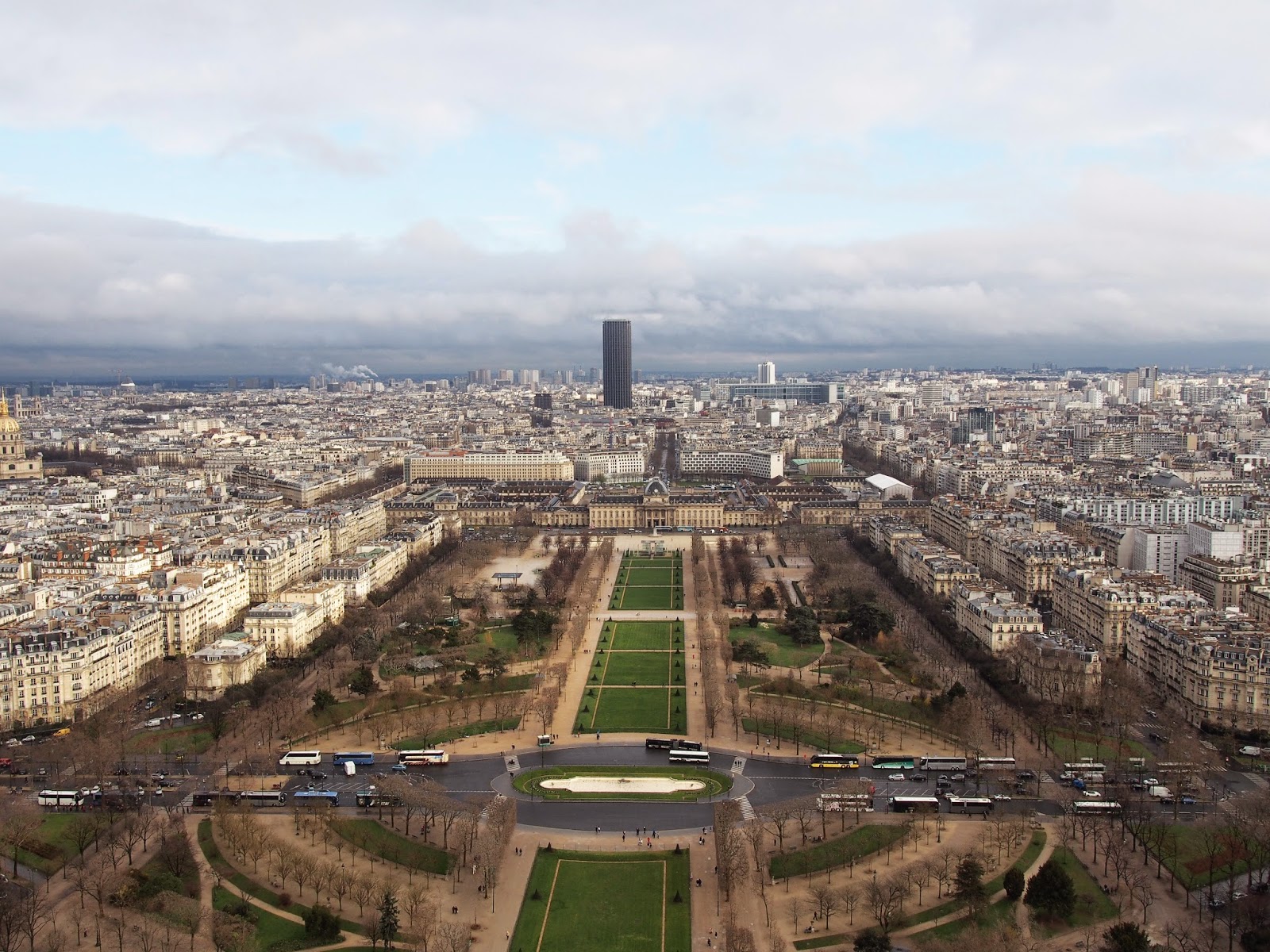 So many pretty sights, but we had
one last pretty thing we wanted to see before heading back for the night, that
was the Eiffel tower when it glitters in the dark. After seeing it on
television on New Years, it was something we wanted to see in in the flesh. It
glitters every hour up until midnight once the sunsets.
Time to spare and so many great
food places to try out, we popped off for some dinner.  A small, cosy French bistro on the back
streets in a residential area… we weren’t expecting a lot. However, we were
totally wrong. Most of the tables had already been reserved for the evening,
and it suddenly turned into something buzzing and filled with happy French
people in a matter of minutes. A popular choice for many, the food must be
good!
Studying the menu for the some
time, we decided on what we wanted. My sister went for the coq au vin and
I had the classic steak and frites (French fries) with a warm peppercorn sauce.
The food was out of this world, full of
taste and different flavours, it was made with a lot of love and passion. 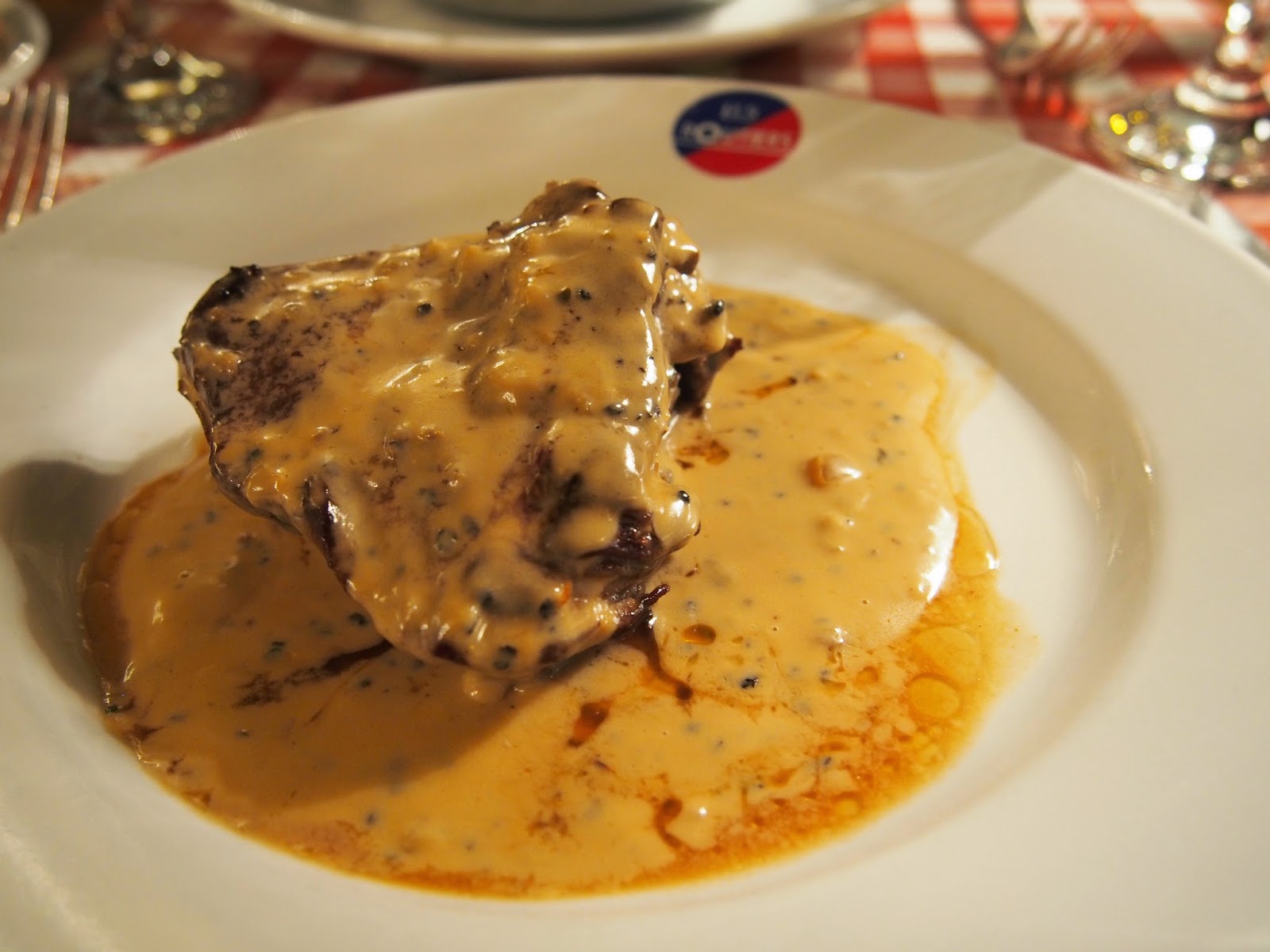 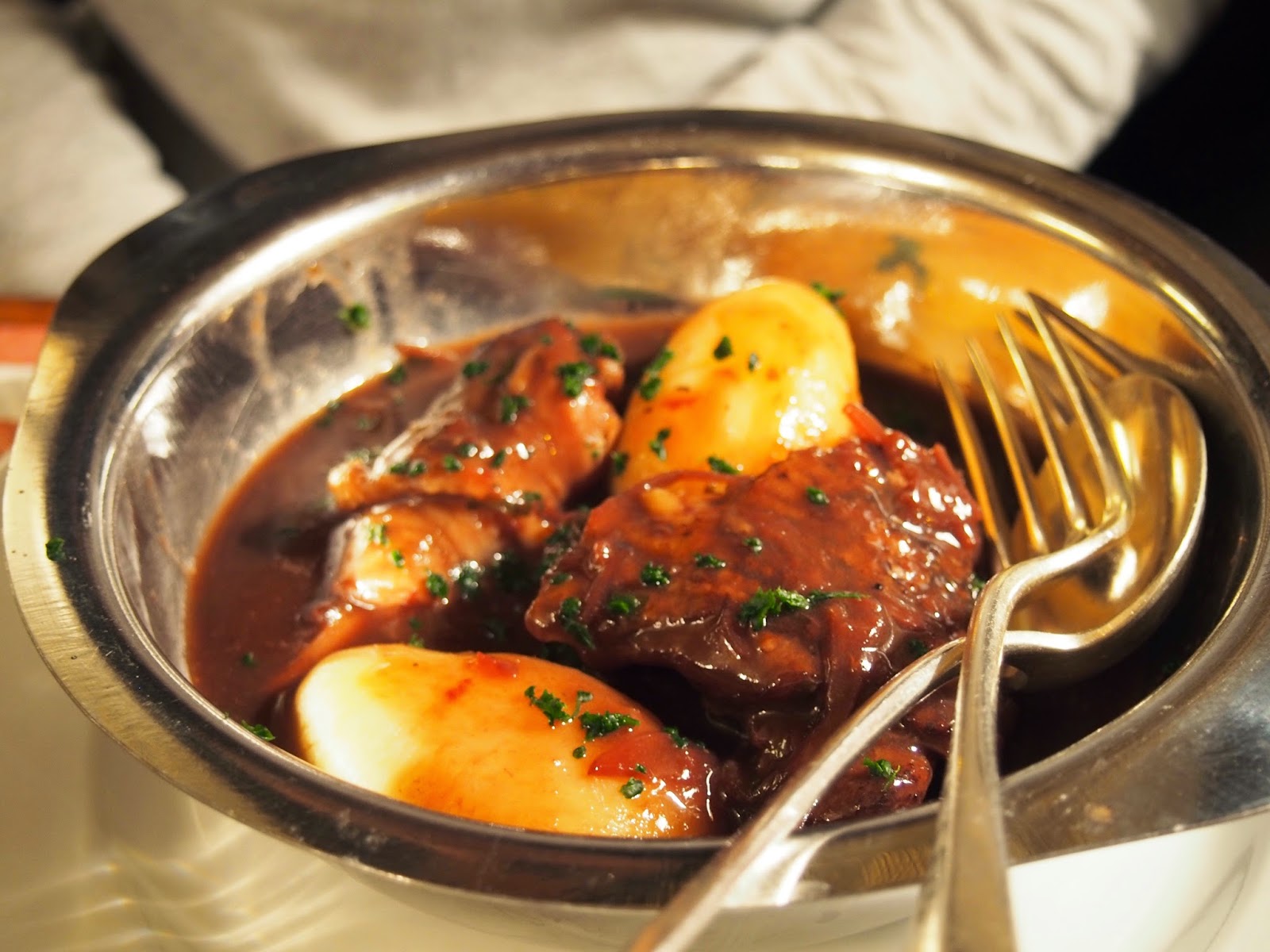 Full stomachs with great food, it
was time to see one of our much-anticipated views. 8pm struck on the clock and
the Eiffel tower lit up and started to glisten. A breath taking view that no
word in the dictionary could describe. It felt so surreal and magnificent. The
only way you could experience such a feeling is by going to see it for
yourself. 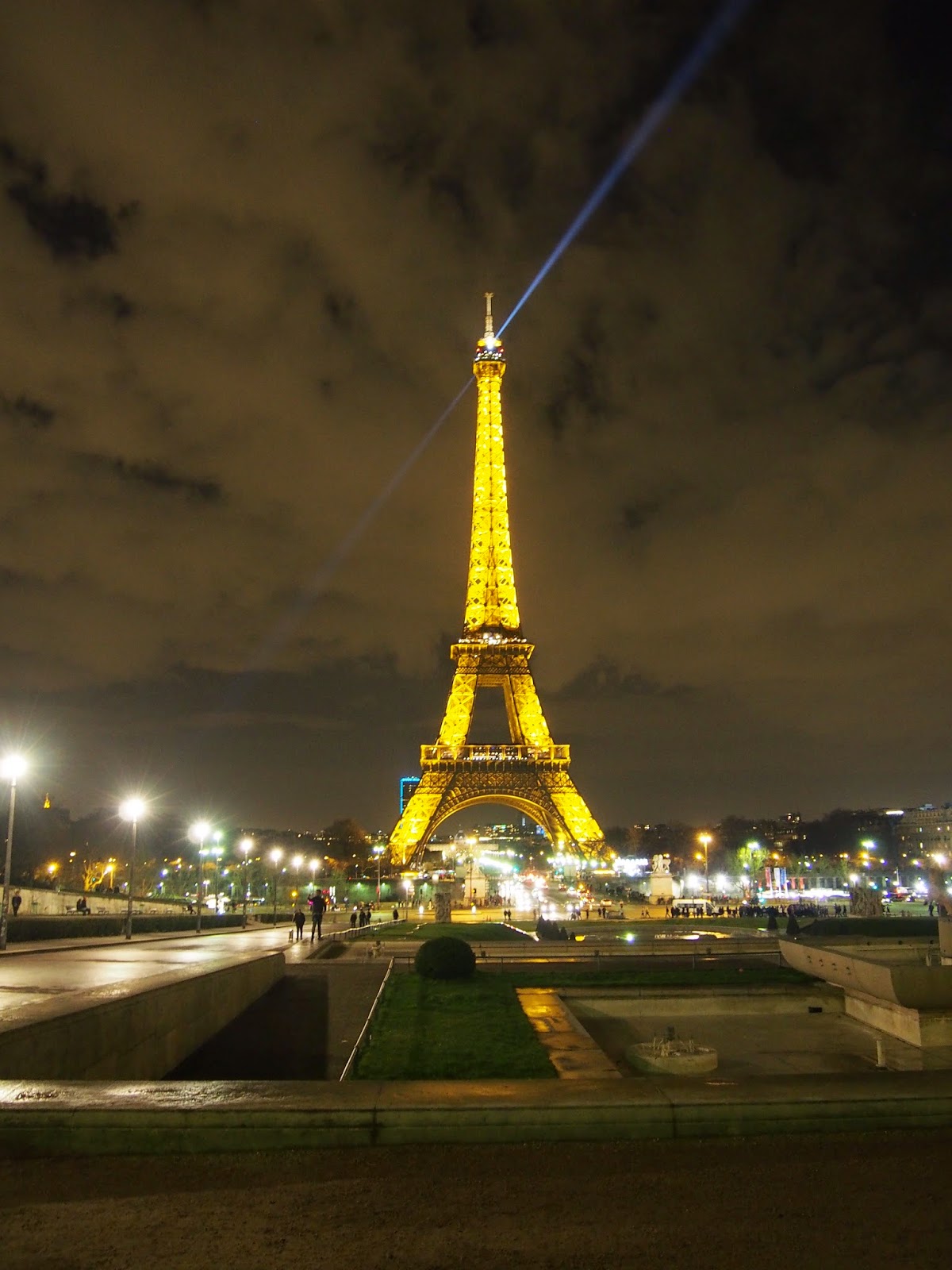 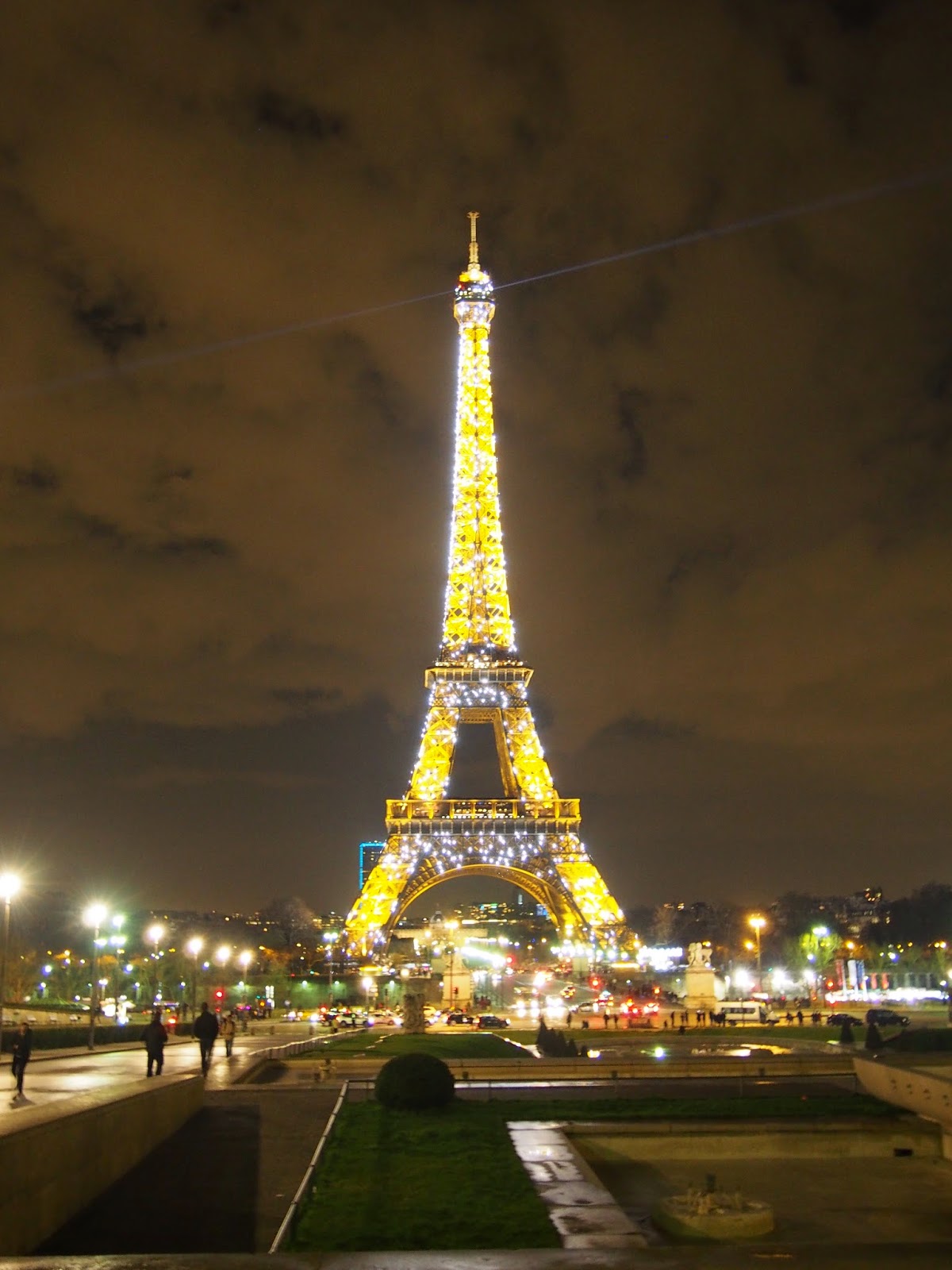 A wonderful end to the first day
in Paris, but there is still three more days of Parisian fun to come. Stick
around?